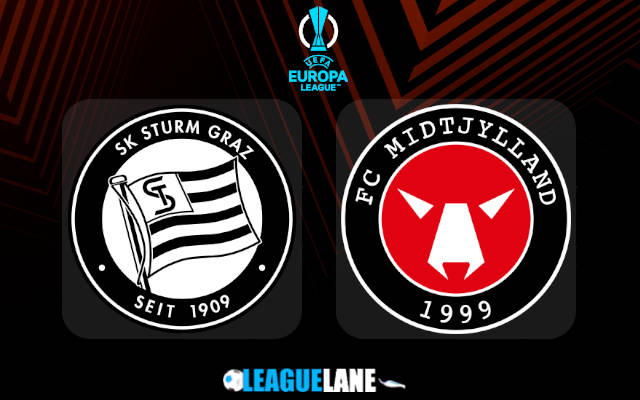 Sturm Graz will begin their UEFA Europa League adventure with the home fixture against Danish side Midtjylland on Thursday evening at Merkur Arena.

Neither team will enter the game on a high following their dismal results in the weekend’s matches in their respective domestic leagues.

Sturm Graz failed to break the deadlock in a disappointing goalless draw at home to Hartberg on Saturday.

Nonetheless, the hosts are still third in the Bundesliga standings with just one defeat in the opening seven rounds of the new season.

Head coach Christian Ilzer can be particularly satisfied with his team’s performances in defense since Sturm Graz have only conceded five goals in seven league outings so far.

The Austrians should have enough space to deliver at the opposite end here against Midtjylland who are not playing defense at all at the beginning of the season.

The Danish outfit have a goal difference of 15-15 after eight rounds in the new Superligaen campaign.

They have won only two of these eight matches so far in the season. The latest of Midtjylland’s failures came on Sunday when they lost 0-2 at home to AaB.

Midtjylland have thus conceded at least two goals in six of the previous seven matches in all competitions.

Sturm Graz did not shine in the previous term of Europa League when they finished Group B at the very foot of the standings with just two points from six games against the likes of Monaco, PSV Eindhoven, and Real Sociedad.

Midtjylland are miles away from their best form at this point of the season. The fact they have won only two of eight league games says enough.

The home court advantage could play a big role on Thursday and we will thus back Sturm Graz to win at the odds of 2.60. We also like the 2.37 odds offered for the Austrians to score two or more goals past the leaky Midtjylland defense here.