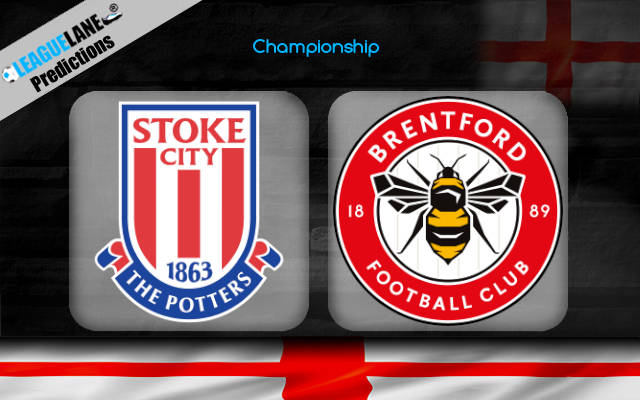 Derby match of the week when it comes to English Championship is happening on Saturday afternoon at bet365 Stadium where Stoke City welcome Brentford FC.

Both squads were ranked quite high before the season started with the odds to earn promotion.

However, both have underperformed heavily and won way less points than expected. Form has been improving in the last couple of weeks, especially for the Bees after beating Coventry City and Sheffield Wednesday consecutively. They are warm favorites to continue that streak, currently being priced at 2.30 to dispatch Stoke City.

Brentford were victorious against Stoke City in four out of the last seven encounters. There was a total of 24 head to head matches between them so far, and The Potters have collected more victories, eleven in comparison to Brentford’s seven.

Brentford never celebrated a victory when it comes to away days to Stoke in ten attempts, losing 80% of matches.

The most recent h2h took place at this venue as well in July. Stoke won 1-0 thanks to the goal of Lee Gregory.

Led by experienced manager Martin O’Neill, Stoke City are currently sitting in 10th place on the table with nine points from six games. The most recent results are looking very promising. Team is undefeated for four rounds in a row, having collected six points on two away days. There is no consistency when it comes to this venue. The last two appearances ended as draws against Birmingham City and Barnsley.

Brentford FC are just one position and one point ahead of the Potters. Team reacted so well to unexpected 2-4 home loss to Preston North End, winning the last two games in the Championship. Departure of Ollie Watkins has left a huge void within the roster, but the replacement Ivan Toney has been incredible so far. This striker bagged seven goals in six appearances. We believe he will lead Bees to another victory this weekend.