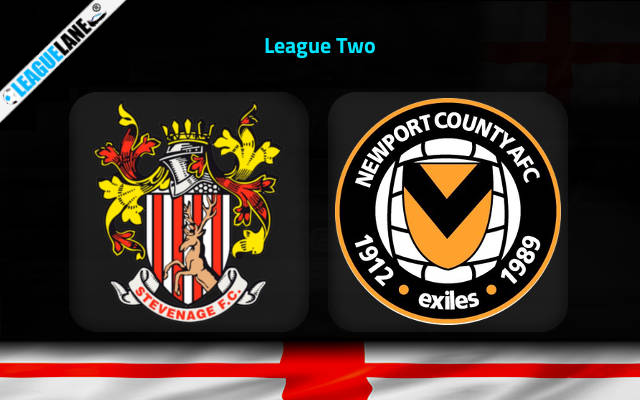 Newport County is first in the Play Offs zone after a 5-game unbeaten run in the league. They need only a point to climb into the promotion zone for League One. Stevenage is struggling as of late, unable to find a win since the last 7 league schedules. With only 4 points safe from the relegation zone, they host the Ports at Broadhall Way this Saturday for the 36th Round of League Two.

The Ports are at the 4th spot on the standing with 56 points from 35 games. They won 15 times in the league while drawing on 11 and losing on 9 other occasions. They scored 56 in total while conceding a sum of 45 which shows that they tend to let in more often.

Newport County go into this encounter after a 1-0 league win against Bristol Rovers in their recent fixture. They have kept a clean sheet in each of their last 3 games against the hosts across all competitions.

On the other side, The Boro resides at the 21st position on the table with only 34 points. Of the 35 matches played, they won only 7 games while drawing 13 and losing on 15 other occasions. Their total goals to conceding ratio stands at 32:54 showing their far from perfect defense.

Stevenage head into this game after a 2-2 League Two stalemate against Leyton Orient, last week. They have failed to prevent opponents from scoring in 5 of their previous 6 clashes, giving up 11 goals on the way.

The hosts have not beaten the Ports in their last 4 matches in the league and haven’t won at home in the past 2 league matches. Meanwhile the visitors are unbeaten in 11 out of the 17 games played on road this season. Hence, we lean towards Newport County to win this upcoming fixture.