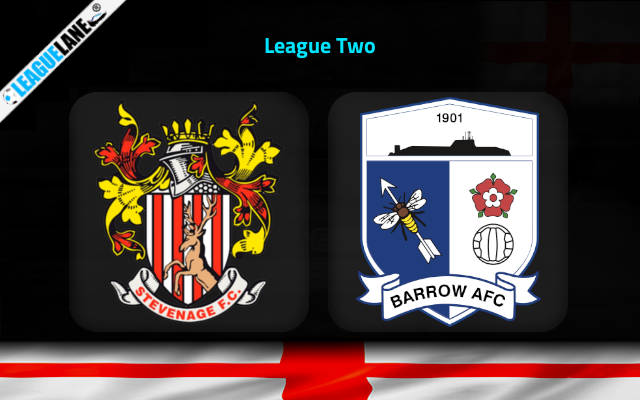 Barrow head to Broadhall Way on Friday for the League Two clash with hosts Stevenage.

Stevenage enter this fixture following a 0-3 Fa Cup victory over King’s Lynn. Their English striker Luke Norris scored a brace in that match. He scored a total of four goals in the previous six appearances for The Boros.

Going on, they have been able to avoid defeat consistently in the league matches. So Stevenage is currently second in the table.

They have a very good defensive line. With an attacking line that plays in perfect harmony with it, they managed to remain unbeaten in 16 of the 19 games they played so far in the season.

Stevenage will have the highest of spirits for all the above reasons. But does not expect a one-sided affair with Barrow on the counterparts.

The biggest problem for Barrow is the consistent defeats they face alternatively to a victory since the beginning of the season. They have lost 7 of the 19 games played so far and have a total of 34 points for positioning at the fourth spot in the league standings.

But it is worth noting that their form has improved considerably in the last few games. They beat Hartlepool 3-1 in their last league match and have won four of their last five games.

By the looks of things, expect an interesting affair between these two outfits on Friday.

Considering all these observations, we are of the view that Barrow will surely be able to find the net against this Stevenage side, but it isn’t expected to be enough to avoid a loss.

We like to back Stevenage to Win & Both Teams to Score as the main bet for this interesting League Two clash.