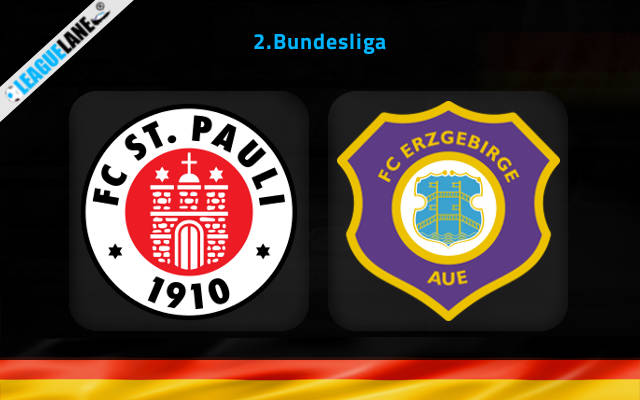 In game week 19 of 2. Bundesliga, St. Pauli faces Erzgebirge Aue for their next match on Saturday at Hamburg.

St. Pauli is in the first position on the league table with 26 points from 18 matches. They faced a loss in their last match against Holstein Kiel, in which St. Pauli couldn’t score a goal against the opposition. The match ended with 3-0 FT score.

Loss in the last match broke the team’s unbeaten streak for four matches. The team has only suffered losses occasionally. They have won in 11 of their matches and have scored in most of their matches as well. The team can get back into form at any time and the opposition will have a difficult time facing them. The team has exhibited great performance when it comes to home matches. They are on a hot streak at the moment. They have not lost in a single match in their home matches and have kept a clean sheet in four of the eight home matches as well.

Erzgebirge Aue stays in the 17th position with only 14 points from 18 matches. Yet another loss has been added to the team’s tally after their last match against Nurnberg. The match ended with 1-3 Ft score.

The team moved down to the relegation zone after suffering losses in their last matches. They are on a loss streak for the last four games. Erzgebirge has scored in most of their games in the last ten matches. Their away matches have not produced the results the teams had hoped. They have only won in one of the eight away matches they have played.

St. Pauli has exhibited great performance in their matches this season and has scored in most of their matches as well. They are the clear favourites for the upcoming match. They also have the advantage of playing in their home ground where they have not lost any match. Erzgebirge will have a difficult time facing their opponents. They have only one win in their away matches as well.