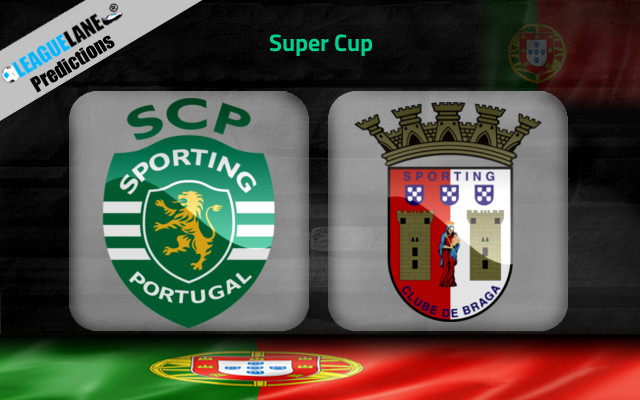 Sporting Lisbon and Sporting Braga will battle it out for the first trophy in the new season in Portuguese football on Saturday evening when they play each other in Portuguese Super Cup at Estadio Municipal de Aveiro.

The team from Lisbon return to the Super Cup clash after 2019 and a painful 5-0 defeat to bitter rivals Benfica.

The players will certainly have that game in mind as they will be more motivated not to afford a similar failure this time around.

Sporting have done an amazing job last season when they won the title with a five-point cushion ahead of runners-up Porto.

Against all odds, Sporting have been in full control of the standings throughout the entire season and they deservedly got their hands on the Primeira Liga silverware for the first time in twenty years.

They take on Taca da Portugal champions Braga in this Super Cup clash. Braga had a subpar Primeira Liga campaign, finishing fourth, with a 21-point deficit to Sporting.

However, they had a fabulous run in the cup, beating the likes of Porto and Benfica in semifinal and final respectively.

This will only be Braga’s second Super Cup tie. They disappointed heavily in the first one, falling 0-3 to Benfica five years ago,

Both sides made numerous changes this summer and their managers will certainly need some time to bed in the new arrivals. From what we could have seen during the pre-season, both Sporting Lisbon and Braga look fantastic.

Sporting Lisbon have been particularly impressive and they will come into this on the back of three straight wins in friendlies. They bagged five goals in back-to-back victories over French Ligue 1 outfits Angers and Lyon. We do find value in backing them to snatch the fourth subsequent victory over Braga at the odds of 2.55 here.