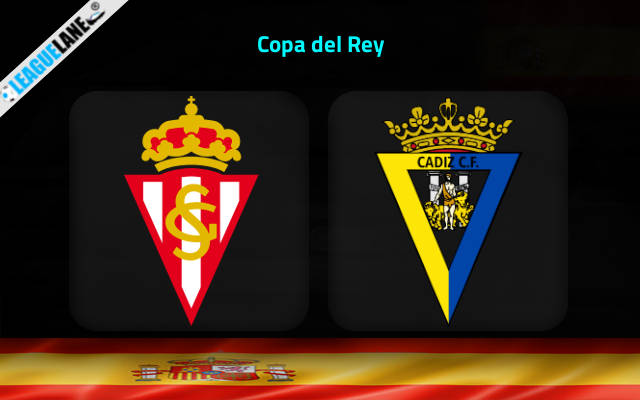 Gijon is currently 14th in Segunda Division while Cadiz is battling the relegation group at the 19th spot on LaLiga. The visitors are struggling to find a win and have ran across 7 games unable to secure all 3 points in the league. The Red and Whites are set to welcome the visitors at Estadio El Molinón this Saturday hoping to gain advantage of their recent inconsistency.

Gijon escaped the round of 32 after a victory over the Segunda competitor Alcorcon by 2-1. They then advanced into the draw of 16 with Villareal who had previously smashed the Spanish third tiered opposition Sanluqueno by 7-1. Gijon vs Villareal then ended at 2-1 with the Red and Whites qualifying for the round of 8.

The hosts drew 3 games in the last 5 league fixtures with the latest match ending in a draw to Malaga by 2-2. They are currently 14th in Segunda Division with 29 points. Of the 23 league games played, they won on 7 while drawing and losing on 8 matches each.

On the other side, round of 32 for Cadiz was scheduled against Albacete who are in the Spanish third tier. That match ended in 1-0 and the Pirates got into the draw of 16 against the LaLiga2 Fuenlabrada who previously defeated San Sebastian Reyes. They qualified for the round of 8 with 1-0 in the end by a 93rd minute goal from Cadiz thereby beating the Segunda opposition.

The visitors are at the second last spot in the league with 2 back to back losses against Sevilla and Osasuna. They are currently struggling in the red zone with only 14 points from 20 league games played so far. Having won only twice on the league, they lost another 10 other matches.

We envisage a home win this Saturday as Gijon is the better when comparing the two. Also the visitors are currently struggling for a win in the relegation zone and might not get a chance to to outperform the LaLiga 2 contendors.