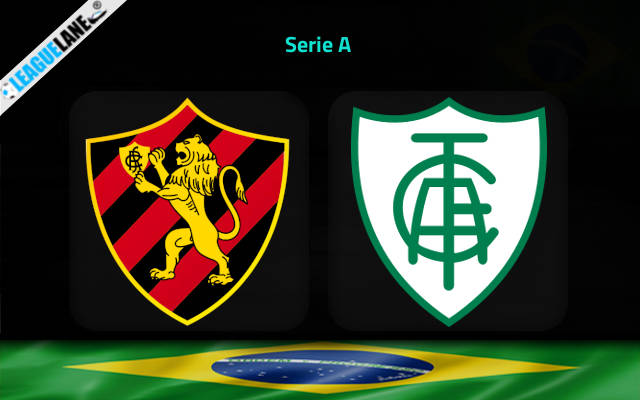 Sport Recife look to have improved their defensive displays of late. They shipped only one goal in the last two league outings and that lone goal came in the sixth minute of the stoppage time in the weekend’s defeat at Fluminense.

America Mineiro also did well defensively of late, shipping just two goals in the last four league affairs. The Under 2.5 goals FT is the way to go.

Sport Recife will be searching for the salvage points on Wednesday evening when they play host to America Mineiro in the 31st round of the Serie A.

They currently sit fourth from bottom but are five points shy of the safe zone and desperately need three-pointers in the remaining eight games of the season to prevent the drop to the second division.

Sport lost three of the last four league games, but they did manage to pick up a 2-0 victory in the previous home fixture at the start of the month.

Gustavo Florentin’s men were moments away from securing a point in the weekend’s clash with Fluminense but were unlucky to concede the 96th-minute goal and eventually lose 1-0 on the occasion.

America Mineiro are eight points above Sport in the Serie A table. A defeat here could make their position much more complicated ahead of the final seven fixtures of the season.
America have generally grown in both form and confidence since Marquinhos Santos took over Vagner Mancini on the bench just less than a month ago.

They ended a run of two wins and a draw with a narrow 1-0 defeat at sovereign Serie A leaders Atletico Mineiro on Sunday.