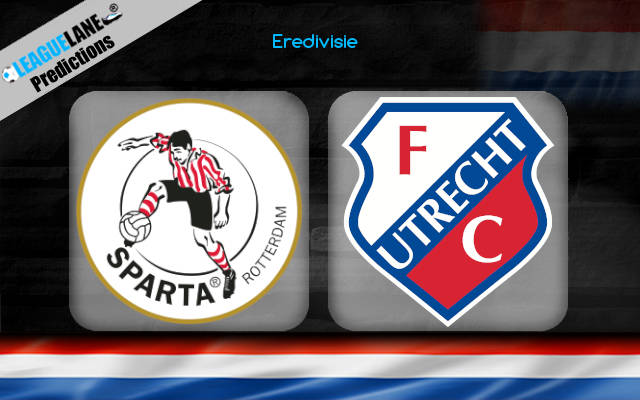 Sparta Rotterdam will try and keep their place in the top eight and thus secure the Dutch UEFA Conference League playoffs. Utrecht are already there and will feature the playoffs regardless of what happens in the last two rounds.

Sparta grew in both form and confidence just ahead of the most important part of the season. A run of three successive victories made the dream of European football very much a reality for the team led by Hendrikus Fraser.

Sparta have tightened things up at the back lately, shipping just one goal in the last three league affairs.

They have won six of the last eight, losing just one in the process (2-0 at AZ Alkmaar). At home, Sparta have won four on the spin, bagging at least two goals in each of the wins and keeping three clean sheets along the way.

Nevertheless, Fraser’s troops will have to be at their very best on Thursday if they are to pick up a precious three-pointer against Utrecht.

The visitors have been enjoying a decent run of form themselves lately. They will travel to Rotterdam unbeaten in four subsequent Eredivisie ties, a streak that includes a 1-1 draw at champions Ajax.

The visitors are seven points above Sparta and will play the UEFA Conference League playoffs in the post-season regardless of their results in the final two rounds.

Utrecht have been the dominant side in this match-up, winning 18, drawing 9, and losing 9 of the last 36 encounters with Sparta.

Utrecht will enter this on the back of nine straight victories over Sparta Rotterdam in official meetings.

Sparta have a nice chance to end a dismal run in head to head games with Utrecht. If they are ever going to break the nine-game losing streak, it is this time.

The hosts will be much more motivated to claim the spoils here. They will also go into the match on the back of four subsequent home wins in the competition. We just can’t look beyond the sky-high 3.20 odds offered for our predicted scenario.