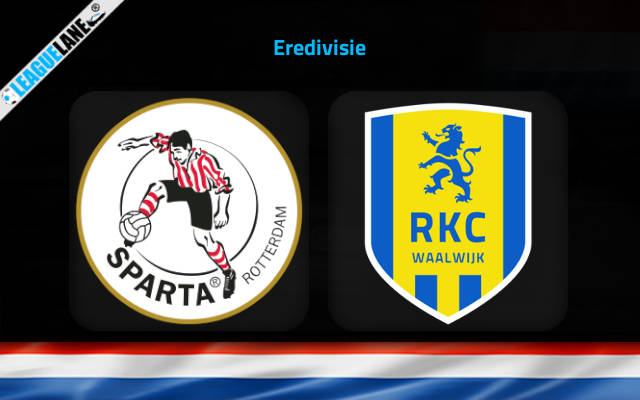 Sparta Rotterdam vs RKC Waalwijk Predictions and Free Tips from our expert tipsters when the teams go head-to-head in Dutch Eredivisie on Tuesday, 24 January 2023.

Sparta are one of the few teams in the whole league to have remained unbeaten in the last five game weeks. They also have a near-perfect record at home this season in the Eredivisie.

Meanwhile, Waalwijk are one of the weakest teams in the league based on recent form. They won just four times all through their campaign – and only one of these came on the road. This sole victory was against the relegation-threatened Groningen.

Sparta recorded six of the past seven overall h2h wins, and at this venue they have been even more dominant. The team won seven of their previous nine h2h clashes at this ground, and importantly, Waalwijk recorded a single win at this stadium since 1999.

Who will win the match between Sparta Rotterdam and RKC Waalwijk?

Sparta are in great form at the moment. Their only defeat in the league in the past three months came against titans PSV, and the last they lost at home in an Eredivisie fixture was back in August – that too against Ajax.

On the other hand, Waalwijk were winless in seven of their past eight fixtures, and they are also on a four-game losing streak on the road. In fact, they won just once in an away fixture this whole season.

And most importantly, they have a worrying h2h record against this rival over the past decade.

Surely expect hosts Sparta Rotterdam to have a huge upper hand this Tuesday.

Rotterdam scored two or more goals in four of their last six league fixtures at home, while their counterparts conceded 11 goals from their past three league match-ups on the road.

Moreover, Sparta also scored two or more goals in six of the previous seven h2h clashes at this ground.

It seems that we are in line to witness a high-scoring affair this game week.

Sparta are yet to concede a goal in a league fixture after the World Cup break, and they kept clean sheets in four of their former seven h2h meetings. On top of that, Waalwijk failed to find the back of the net in three of their past five road trips.

It appears that the struggling Waalwijk might find it hard to slot in a goal against their in-form hosts.

At present Sparta are one of the best and most consistent teams in the Dutch top flight. They won six of their last seven league fixtures at home, and the last they lost at this venue in an Eredivisie game was in August – against Ajax.

On the other hand, Waalwijk are on a four-game losing streak on the road. Going back to May, they have a single win on the road – and that too against the 15th placed Groningen.

Furthermore, they have a worrying h2h record against this rival over the years, and particularly so at this venue.

Likely, expect a win for Sparta Rotterdam at an odd of 1.83.

Going on, they are scoring goals at an impressive rate at the moment, and have always done so in h2h clashes. In fact, they scored 19 goals from the past seven h2h clashes at this venue, while Waalwijk let in 13 goals from their past four road trips combined.

By the looks of things, count on the hosts to find the back of the net at least twice. And the odds for the same are placed at an odd of 1.83.