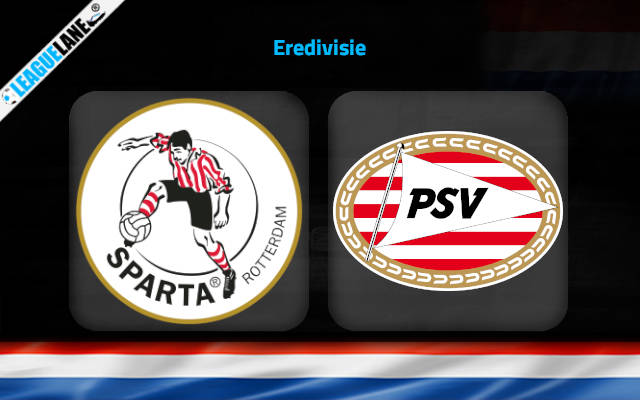 PSV Eindhoven are jut behind Ajax in the Eredivisie title race and they lag by 5 points. They won back to back league fixtures and are in the zone of Champions League qualification.

Sparta Rotterdam is in the relegation zone to Eerste Divisie and are second from the bottom. They had weary run of 10 games across all competitions and they finally found a win in the previous fixture.

With the hope of securing all 3 points, the Peasants travel to Rotterdam this Sunday at Sparta Stadion Het Kasteel for the 24th round of Eredivisie.

PSV Eindhoven is at the 2nd spot on the standing with 52 points from 23 games. They won 17 times in the league while drawing only once and losing on 5 other occasions. They scored 57 in total while conceding a sum of 29 which shows their remarkable attacking front.

The visitors had a 3-1 Eredivisie win over SC Heerenveen in their previous match.

Over the course of their last 6 outings, PSV have amassed the sum of 15 goalsand have additionally got on the scoresheet on each one of those occasions. In that time, they have seen 5 goals scored by their opponents.

On the other hand, De Kasteelheren resides at the 17th position on the table with only 17 points. Of the 22 matches played, they won only 3 games while drawing on 8 and losing on another 14 other occasions. Their total goals to conceding ratio stands at 17:35 so far in the league.

Rotterdam had a 1-0 league success against Willem II after their back to back losses. They have seen their defense breached in 5 of their previous 6 clashes, letting in 11 goals in the process.

Sparta Rotterdam haven’t beaten the visitors in their last 19 league matches and have won only twice out of the 12 games played at home this season. Therefore a win of PSV is up for cards this Sunday.