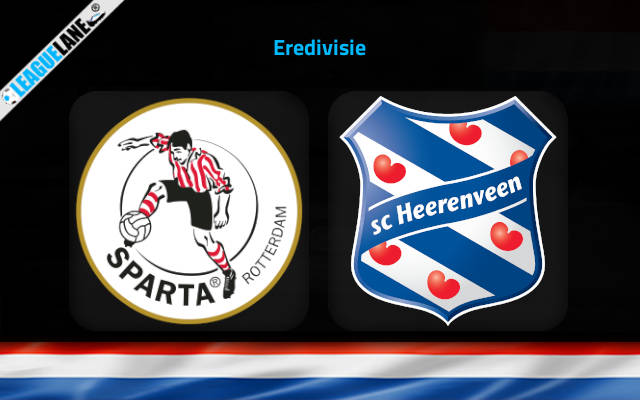 Sparta Rotterdam will be searching for salvation points on Sunday afternoon when they host bottom-half rivals Heerenveen in the 28th round of Eredivisie.

The hosts earned a glimmer of hope in the relegation battle with a streak of two wins, one draw, and one loss in the previous four league outings.

They have tightened things up defensively in the process, keeping back-to-back clean sheets in the previous two affairs against Go Ahead Eagles (a 1-0 win at home) and NEC Nijmegen (a 0-0 draw on the road).

Hendrikus Fraser’s men are now in a solid position ahead of the final nine games of the season. They are only one point below Fortuna Sittard in the relegation playoffs spot and two points shy of Willem II in the safe zone.

Given Sparta have a match in hand on Sittard and two games in hand on Willem II, we do rate their chances of avoiding the drop to Eerste Divisie next season.

The match against Heerenveen is very much a winnable one for the hosts. The visitors do not have much but pride left to play until the end of the season.

Heerenveen are 11th in the Eredivisie standings at the moment. However, they have also been very tough to break down recently.

The team led by Danish manager Ole Tobiasen will travel to Sparta-Stadion Het Kasteel on the back of three consecutive clean sheets.

The return game from this term of Eredivise between these two sides ended in a goalless draw in mid-December last year.

The home court advantage has played a big role in the history of this matchup as Heerenveen generally own a much better record but have negative numbers in away clashes with Sparta Rotterdam.

Interestingly, four of the previous five head to head encounters between these two outfits saw the Over 2.5 goals FT & Both Teams To Score option coming in.

This is a huge match for the hosts who can hardly afford a failure with the clashes against the likes of Ajax, Vitesse, Twente, and AZ Alkmaar upcoming in the next five rounds.

Looking at both teams’ recent form, we see the Under 2.5 goals FT as the best betting option at the 1.65 odds, while we will also be brave enough and back the hosts to win at the 2.15 odds.