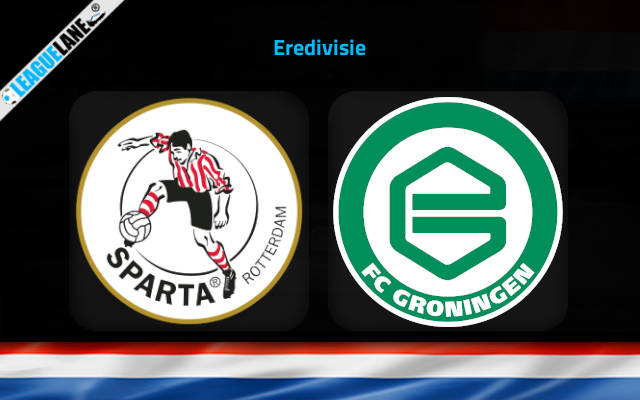 A 3-0 defeat to Feyenoord ended Sparta’s two-game winning streak this season. The defence looked very fragile in that game, as Feyenoord managed to register nine shots on target.

Following this result, the visitors currently occupy the eleventh position on the table.
On the other hand, Groningen secured a win last time against Cambuur. Tomas Suslov found the back of the net in the 71st minute of the game. This win has helped the team climb to the ninth position in the league.

However, manager Frank Wormuth will be worried as his team have conceded ten goals in their last six matches.

It is worth noting that since defending champions Ajax demolished the visitors by six goals. Frank Wormuth has changed the game plan. As a result, the team have only conceded two goals in their last four games.

Also, they have managed to keep two clean sheets as well. Therefore, we can expect the same game plan in this upcoming fixture as well.

Maurice Steijn’s side have lost half of their games this season. Also, the goal difference is nil so far. Do also note that Tobias Lauritsen has scored three goals in his last three appearances.

This season, Groningen are struggling to score goals. They have only scored three goals in their last four league outings. However, the team’s strength lies in its defensive backline. They are conceding goals at the rate of 1.67 goals per game.

Therefore, we can expect a tightly contested game in this upcoming fixture.

Our prediction is that Groningen to win with Both Teams to Score- at 6.50 odd. This is after considering that both teams have scored numerous goals in the last five encounters.

Our second tip for this game is the Correct Score will be Groningen 2-1 – at 12.00 odd. The visitors have scored six goals in their last three games against Sparta at Sparta Stadion Het Kasteel.