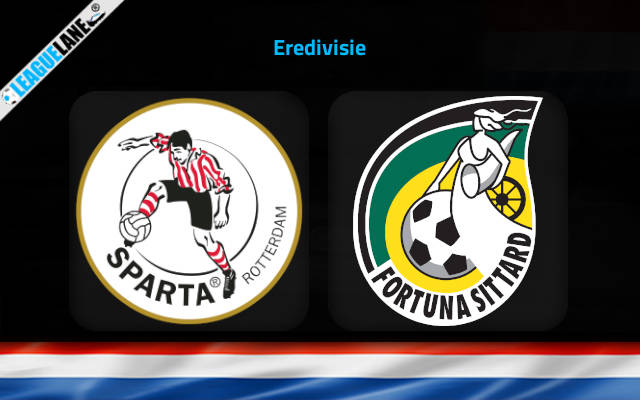 Presently, Fortuna Sittard are the most in-form team in the league. They are on a six-game unbeaten streak. Sparta Rotterdam will try to break this form as they will both go head-to-head at Sparta Stadion Het Kasteel.

Utrecht ended Sparta’s four-game unbeaten streak most recently. In that 3-1 defeat Joshua Kitalano could only score a consolation goal in the 84th minute of the game. This result puts them in the seventh position on the table.

Maurice Steijn tried a different formation in the game against Utrecht. However, this change in plan resulted in their fourth defeat of the season. He will have to be cautious against Fortuna.

Julio Velázquez’s side began this month on a good note. They maintain their unbeaten record this month.

In their last league outing, they picked up an important point against Feyenoord. In that 1-1 draw it was Inigo Cordoba who scored the opening goal for the current visitors.

It is important to understand that goalkeeper Ivor Pandur played one of his best games this season as he thwarted Feyenoord’s ten shots on target.

For Feyenoord it was like a practice session as they tried 33 shots in total, yet it was Julio Velázquez’s side who took one point from them.

They are currently at the eleventh position on the table. Moreover, they have won only three games till now.

The visitors have scored only one goal in their last two matches. Therefore, considering their lack of goals, they will have a difficult game against Sparta this week.

An interesting fact is that both teams are separated by a margin of five points on the table. The hosts’ defence have been rock solid since the beginning as they have conceded fourteen goals till now.

Nevertheless, a win will help them move closer towards the third position on the table.

You can back the following as our first prediction is that the Sparta Rotterfam will be the first team to score – at 1.61 odd. This is after considering that in their last two victories against Emmen and NEC, they scored the first goal in less than fifteen minutes of the game.

Our next tip for this game is that Over 2.5 goals with Both Teams to Score– the odd for this combined tip will be at 2.10 odd. In the last two head-to-head matches at Sparta Stadion Het Kasteel both teams have scored a combined total of seven goals.