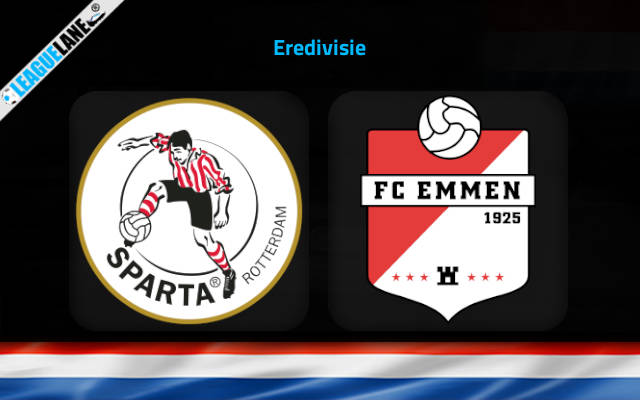 Following a four-game losing streak, Emmen managed to hold Heerenveen by a goalless draw last time. They will now travel to Sparta Stadion Het Kasteel to clash with Sparta Rotterdam.

The host are at the eighth position on the table. In their most recent outing, they had faced RKC Waalwijk and the game ended in a 2-2 scoreline.

Moreover, Arno Verschueren scored a brace in that game for Maurice Steijn’s side. Do note that Shurandy Sambo received a red card in 62nd minute of the game. Hence he will not be available for selection ahead of this match.

On the other hand, the visitors are suffering a downfall the season. The only reason they are not at the bottom-most position on the table is that they have a slightly better goal difference number.

They have only won a single game this season. By the looks of things, we can expect Sparta to win this fixture. As the opponents are struggling this early of the season. Also, they have conceded eleven goals in their last four games.

This season the visitors have lost over 67% of their games. Moreover, they are on a five-game winless streak. It is worth knowing that the host has a decent goal-scoring record. The goal-scoring rate is currently at 1.38 goals per game.

This upcoming fixture is crucial for Emmen. If they secure a win, it will take them four places above the relegation zone.

Therefore, our prediction is that be Sparta Rotterdam will win – at 2.00 odd. This is after considering that the host are on a three-game winning streak at Sparta Stadion Het Kasteel Moreover, the recent form shows that they have won three games out of the last five.

Also, our next tip for this game is that Over 2.5 goals will be scored – at 1.85 odd. In five of the last six meetings at Sparta Stadion Het Kasteel. At least three goals have been scored per game.