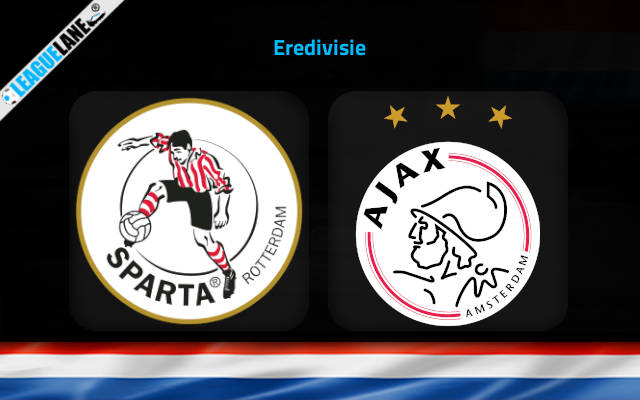 Ajax claimed their 36th Eredivisie title the past season. Their goal scoring and preventing side had an exceptional harmony that season. Such a run will only fuel them to record the same wherever they plays.

The Jews have successfully converted their positive spirits into the game. They started off with a positive outcome against Fortuna Sittard and coupled it with their impressive victory over Groningen the past season. The current run will be boosting them with spirits.

Sparta Rotterdam will play host to Ajax in the coming Eredivisie fixture at Sparta Stadion Het Kasteel. Bookies are in favour of Ajax despite of the home advantage of Sparta Rotterdam. With the recent recordings of The Jews, we can expect a one-sided affair on Saturday.

The Red-White Gladiators had a disappointing start to this season. They recorded a goalless draw to start with. Instead of bettering it in the next, they turned dreadful conceding a 2-3 defeat against Alkmaar.

Meanwhile, Ajax have started off well and maintained it in the second as mentioned earlier. Both the fixtures saw their offensive line-up scoring goals in a fashionable rate.

On the road, Ajax looks decent enough too. They are unbeaten in four of the past five fixtures across all competitions.

Sparta Rotterdam started off with a negative display at home this season. It was their second defeat in the past three.

On top of that, Ajax follows an exceptional form against Sparta Rotterdam in their head to head meetings. Considering all the stats, we are expecting a win for The Jews when they meet the hosts Sparta Rotterdam the coming Saturday in an Eredivisie fixture.