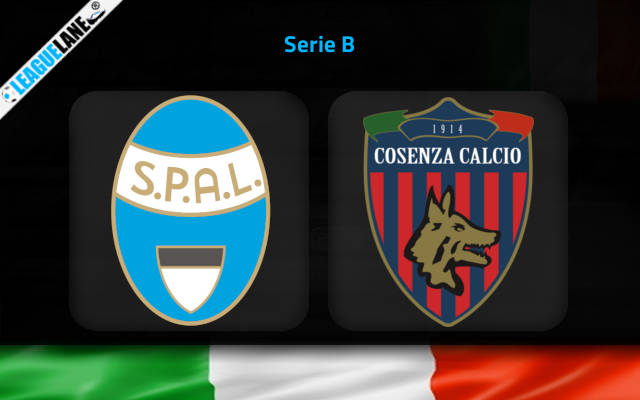 Currently battling relegation, Cosenza lost the last 2 league matches and hopes to turn the tables as they travel to Stadio Paolo Mazza this Tuesday to meet SPAL, who are also at the brink of falling into the red zone.

Cosenza is at the 18th spot on the standing with 24 points from 31 games. They won only 5 times in the league while drawing on 9 and losing only on 18 other occasions. The visitors have lost 4 of their past 5 league games and are on a terrible run as of recent. They have almost double the conceding figures than the scored ones marking at 50.

Cosenza lost the last league fixture to Parma by 1-3. Things have not been going that well in front of goal for them recently, with the side failing to score in 3 of the last 5 games. They have also fired blanks in 12 games this season.

On the other hand, SPAL resides at the 15th position on the table with 33 points. Of the 32 matches played, they won on 7 while drawing on a dozen other occasions. It has been quite an unusual experience to see them both score and concede during the same games in a Serie B, with this happening just three times out of a possible 11.

SPAL will play in this fixture following a 2-2 league draw against Alessandria. Over their preceding 6 fixtures, Roberto Venturato’s men have netted 6 times resulting in an average number of goals per match equals to 1.

Cosenza has never won an away game this season, considering 16 games played on road in total. They have also lost the last 3 away games coming into this one. They haven’t also won away from home in the past 25 league games.

SPAL are also pathetic at home, winning only thrice of their last 16 games at home. They have also lost the last 2 games played at home.

We feel that a win for SPAL is the likeliest option here as they are better than the relegation fighting ones.