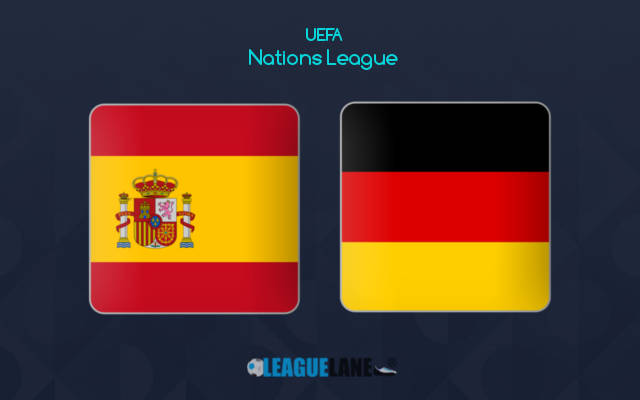 The most anticipated clash of UEFA Nations League this week is taking place in Sevilla where Spain hosts Germany. Home team is in a need of victory and three points to jump over the Panzers and secure a spot in the semi-finals. The Red Fury wasted great opportunity a couple of days ago, winning only one point on the road against Switzerland and missing two penalty kicks.

Germany embraced that gift and took the lead in Group D thanks to convincing 3-1 victory against Ukraine. Who is going to win the big game? Bookies are offering very close odds for home and away win – Spain is currently at 2.50 to win the game, Germany at 2.70.

Their first clash in UEFA Nations League was played on 3rd September in Stuttgart. Germans had the lead thanks to goal of Timo Werner all until the 94th minute when Gaya scored a lucky equalizer.

When it comes to all-time stats, Germany have 9-7 lead in terms of victories while eight duels ended without winner.

55 goals were scored in all previous encounters, which averages 2.36 per duel. Five out of the last six meetings ended Under 2.5 FT.

The Red Fury ruined all the good work from the early stages by losing to Ukraine and drawing to Switzerland. They ended the first three rounds with seven points, having big advantage over all other teams.

Most recent appearance in Basel was super-dramatic. Spain scored the equalizer through Gerard Moreno in 90th minute. Previously, Sergio Ramos missed two penalty kicks. Plus hosts had one man sent off in 79th minute.

All things considered, coach Luis Enrique has very small number of reasons to be satisfied. Both Moreno and Morata are in decent form, so we wouldn’t be surprised to see them both in the starting lineup against Germany.

This season is probably one of the best Timo Werner ever had. Besides scoring a lot of goals for Chelsea FC, this striker is playing super-important role in Germany’s success lately. He bagged two goals against Ukraine last weekend, fourth in this Nations League campaign.

Joachim Loew’s team is having issues when it comes to defending though. They failed to keep one single clean sheet in this competition in the last eight appearances.

Therefore, we are expecting an open clash in Sevilla, so BTTS pick does make a lot of sense.