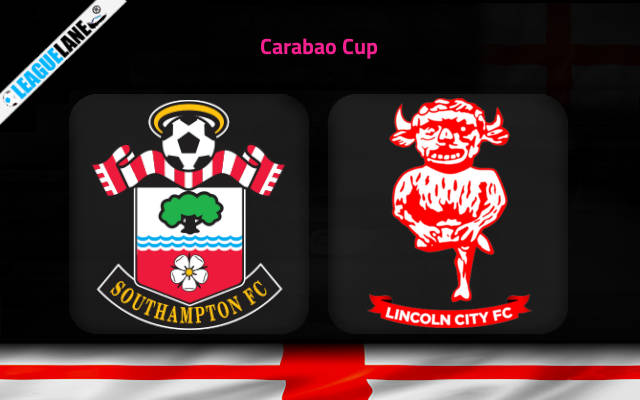 Southampton vs Lincoln City Predictions and Free Tips from our expert tipsters when the teams go head-to-head in Carabao Cup on Tuesday, 20 December 2022

Southampton are finding it difficult to win games at this stage of the season. In the third round, they faced difficulty to beat Sheffield Wednesday. Things are not looking good for them as they are currently in the relegation zone in the Premier League.

On the other hand, Lincoln defeated Bristol City by 3-1 to reach this knock-out stage. They have played well in various competitions this season. However, they are not performing in their domestic league.

Both teams will be meeting for the first time.

Lincoln’s last away win was against Bristol City in this competition. The host are winless in four of their last five home matches in all competitions.

Who will win the match between Southampton and Lincoln City?

Lincoln will likely win this fixture; they are unbeaten in six of the last seven outings in all competitions. Moreover, the host are on a three-game losing streak. They even struggled to win against Sheffield Wednesday in the previous round.

Do note that the visitors recently scored four goals against Everton in the EFL Trophy competition recently. This shows that they perform well in cup competitions.

The visitors have scored at least two goals against Barrow and Bristol City in the Carabao Cup. At the same time, the host have not scored from open play when they played against Sheffield Wednesday in the third round.

Both teams have scored consistently in their respective league matches. Even in this competition, both teams scored at least one goal.

We can back the visitors to win this game As their opponents are having an abysmal form. Moreover, they won comfortably against Bristol City and Barrow earlier.

Therefore, the first tip is that Lincoln City will win this game – at 11.00 odd.

Our second tip is that Both teams to score – at 1.95. Both teams have scored consistently in this competition.