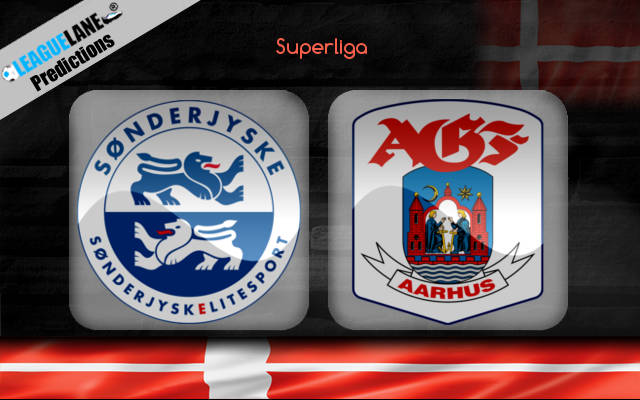 SoenderjyskE is close to making it to the top of the table this term as it stands. They have picked up 13 points from their 6 league appearances until now. The host is on a four-game unbeaten streak, following a 1-2 win on the road against Randers last time out in the schedule.

AGF has dropped to the 5th spot in the table, and the second runners-up of last season Superleague are just 2 points behind the host. Their five-game unbeaten streak in the campaign came to an end with a 0-1 loss at home to the likes of FC Copenhagen in the previous encounter.

SonderjyskE has had a decent start to the new edition of the Danish Superleague. They will try to build on their two-game winning streak in the campaign. The host enjoys the ground advantage in the game, and having lost only one clash so far in the league this season, they look good for the upcoming match.

AGF is not so behind apart from being caught off guard late in the league. Their unbeaten streak was broken in their schedule, but the visitor is likely to bounce back soon. Since it was their only loss in the campaign until now, David Nielsen will have time to pick up his team from that defeat.

It has to be noted that Aarhus has been unbeaten for the past nine h2h meetings with the home team in their overall records. Even in their recent four visits, the Whites have kept their form tight.

So, the double chance favoring AGF will probably be the best bet for the punters. We can expect both sides to find the back of the net in ninety minutes, which is why a BTTS will also come in handy.