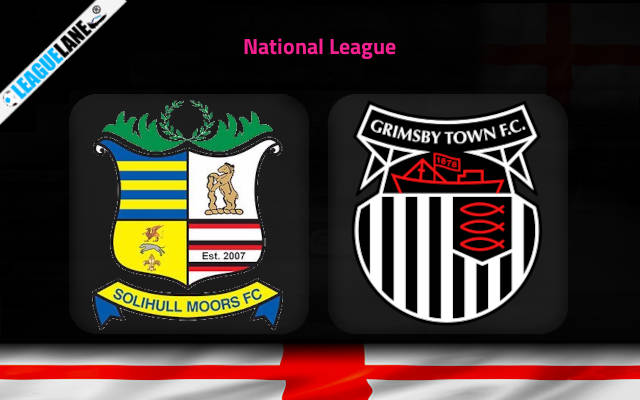 Solihull Moors and Grimsby made an incredible journey to reach to this ultimate showdown of England National League. The Play Off final is set for this Sunday afternoon as both the sides meet at Blundell Park for a winning ticket to EFL League Two.

With Stockport County and Wrexham performing so well, Solihull went into their final games of the season aware that third position in the standings was their most realistic target. At a time when Wrexham had lost all momentum, there is an argument that Solihull are now favorites to earn promotion to the EFL for the first time in their history.

The Moors defeated Chesterfield at home by 3-1 in the Semi-finals to earn a spot in the Finals. They have been so strong in the offensive side as of late, hitting 18 goals past their opponents during the course of their previous 6 outings.

Grimsby completed the standings at 6th spot with a Quarter final Play Off promotion. They were pitted up against Notts County in the quarters and only after extra time they won narrowly by 2-1 in the 119th minute winning goal.

The Mariners then showed the same character by pulling a clutch in the dying minutes of extra time in the Semi-final game against Wrexham. That game ended on a 5-4 goal shower. In a total of 5 out of the previous 6 games featuring Grimsby Town, a minimum of three goals have been hit.

Solihull Moors has been outstanding recently, winning the last 6 games in a row. They scored at least 3 goals in their last 5 games coming here while maintaining 2 cleansheets. They have also won against this for in their previous 2 h2h meet-ups.

Meanwhile, Grimsby won the last 2 games after extra time of regular gameplay. They won the last 4 games coming here but have only managed to win by a narrow margin showcasing their poor defensive side.

Considering their previous h2h stats and current form, we feel that Solihull Moors could seal a win this Sunday.