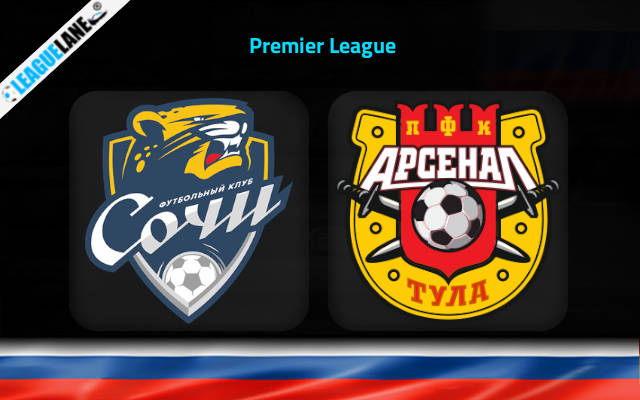 Sochi have been the best team in the competition after the two titans – Zenit, and Dinamo. They are placed third in the table, and have also scored the third-most number of goals in the league.

However, their form has slightly gone off track lately, and with plenty of teams gunning for a podium finish, it’s important that they figure out a way to get back into their groove.

And just as the doctor ordered, they have a great opportunity coming up.

They are at home this weekend, and are pitted against the relegation-threatened Arsenal Tula. This team has the worst defense in the Russian top flight, and have also been a mess on the road right from the start of the season.

By the looks of things, expect a win for Sochi this weekend at the Fisht Olympic Stadium.

Sochi recorded a 3-0 win against Spartak Moscow the last match-day, and they had also won six of their former nine appearances at home.

On the other hand, Arsenal were winless in eight of their past eleven overall fixtures, and they have registered a total of just two wins on the road in the past twelve-month period.

And finally, Sochi also have a good h2h record against this rival in recent fixtures.

For these reasons, expect a win for them this weekend at their home.

Tips for Sochi vs Arsenal Tula