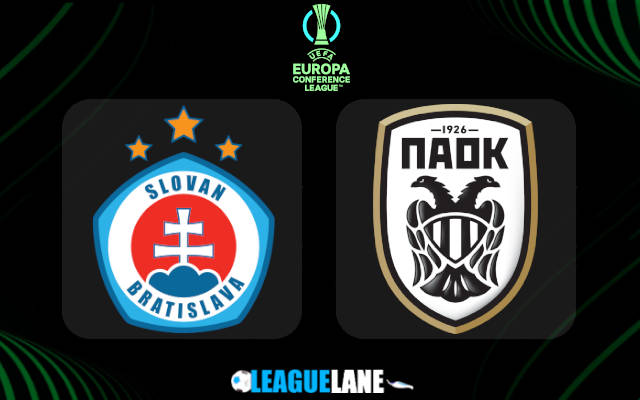 Tehelne pole will host Thursday’s Conference League game between Slovan Bratislava and PAOK, the two teams who are vying for a place in the knockout stages.
Both the sides are currently level on points in Group F, but a win will put one over the other while a draw would tally them yet again on the table.

A second successive Slovakian league and cup double was Slovan’s reward for a dominant domestic season in 2020/21. They are Slovakia’s first representatives in
the UEFA Europa Conference League.

The Sky blues have a poor track record against the clubs from the opponent’s country as they lost 5-2 in aggregate to Olympiacos FC at UEFA Europa League held at August of this year. They even lost against the same team at the UEFA Champions League in 3rd round of qualifiers at 2009.

Greeks are regular performers in the UEFA Europa League group stage, where they have made 8 appearances. PAOK are Greece’s first representatives in the UEFA Europa Conference League equivalent. They have qualified for the competition twice over the last season as runners-up in the league to Olympiacos and as winners of the Greek Cup.

They however, have a remarkable track record against the clubs from the opponent’s country as they have defeated FC Spartak Trnava by 1-2 in UEFA Europa League at 2015. Dating back to 1997 they edged out the same opponents by 6-3 aggregate in a UEFA Cup tournament.

A 2-1 win away to Micholavce in the league at the weekend made it a 10 successive victories for Slovan Bratislava in all competitions. The hosts sit level on points with PAOK Salonika in their UEFA Europa Conference League group.

They recently got defeated against FC Copenhagen by 2-1 in Group F while they hosted Slovan Bratislava to a 1-1 draw in September. That highlighted just how evenly matched these two sides are. But the home side have been on a good run of form lately, and that tilts the balance in their favor.