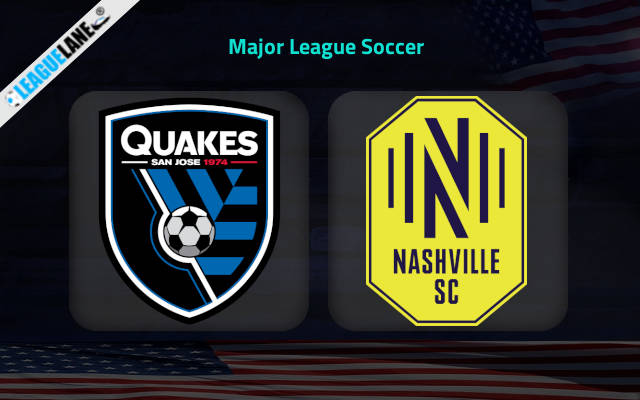 SJ Earthquakes played against Houston Dynamo in their last match, in which Houston scored four goals while San Jose could score only three. The match ended with 4-3 FT score.

Nashville SC has found two wins in the last two consecutive matches. They had finished in the third place in the last season, securing 54 points from their matches. They will hope to play better this season. From the matches they have played so far, the team has got three wins, one draw and two losses.

Nashville played their last match against Sporting KC. Sporting KC had scored the first goal in the match, but couldn’t keep the lead for the remainder of the match. Nashville came from behind and scored two goals, ending the match in a win for Nashville with 1-2 FT score.

The teams have not played against each other.

The Western Conference teams stand 8-points apart from each other. The six-game winless streak has put San Jose at the bottom of the table while Nashville stands in the seventh position. Nashville is on a win streak in the last two consecutive matches.

SJ Earthquakes have played three matches in their home ground so far. The two draws were secured when they played in their home ground. They have scored over 1.5 goals in the draws as well. Nashville has played all their matches in the away ground so far. They have three wins in the six of their away matches and have won in the last two consecutive matches.

Looking at the records, Nashville is the better team of the two and is more likely to achieve the win. With both teams have scored in their previous matches, we can expect both teams to score in this match as well, ending the match with over 2.5 goals.