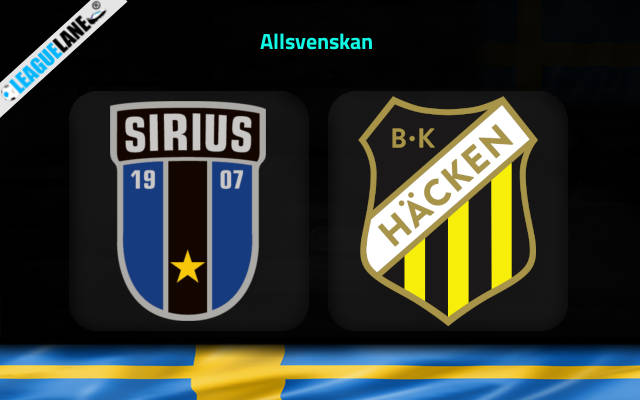 So far this season Hacken have been the absolute best team in the Swedish top flight and it is no wonder that they are currently in possession of the top-most spot. Meanwhile, Sirius have failed to show consistency in their performances lately and they have also been letting in goals in huge numbers.

They are placed 9th in a table of 16 as of now and they have managed to register just 7 wins till this point as well.

In the meantime, Hacken have lost a total of just twice all through this campaign and they have scored the most number of goals of all the teams in the competition as well.

In fact while they have found the back of the net an astonishing 43 times, only 3 other teams in the league have even managed to score more than 30 goals.

Moreover, they also have a dominant head-to-head record against this rival in recent years and considering all these observations it is expected that we are about to witness a victory 4 Hacken this Monday.

Sirius were winless in 11 of their past 16 overall fixtures, and in the process they had even gone on separate 2-game as well as 3-match losing streaks. Do also note that they have won a total of just 3 times in front of their home crowd in the past 4 months.

On the other hand, Hacken were unbeaten in 17 of their previous 18 overall fixtures and in the process they had gone on a 7-game winning streak as well as 2 separate 2-fixture winning stretches.

Considering these stats, and head-to-head domination of Hacken in recent fixtures, expect a victory for them this Monday.

Tips for Sirius vs Hacken