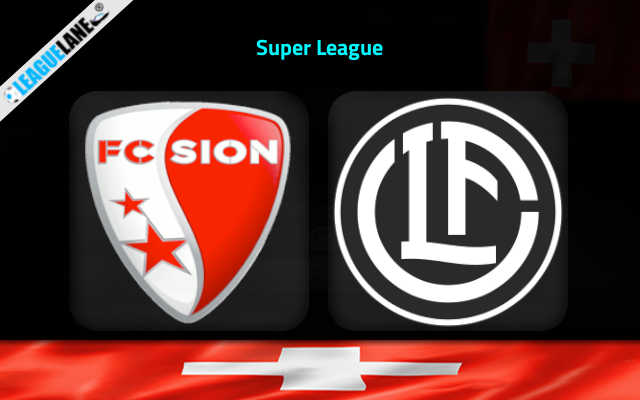 Sion will be hoping to make it three consecutive Super League games without a defeat on Saturday evening when they host top-half side Lugano in Matchday No 26 at Stade de Tourbillon.

Sion somehow managed to survive last weekend away at St. Gallen as they held on to a 1-1 draw despite being under constant pressure from their counterparts on the occasion.

St. Gallen even missed a late penalty-kick eight minutes from time. The team led by Italian manager Paolo Tramezzani were limited to just six shots in total during the 90 minutes of play at Kybunpark.

Sion have generally not been capable of producing loads up front in the recent weeks. They celebrated only a narrow 1-0 home win over the rock-bottomed Lausanne ten days ago.

On another note, though, it is worth mentioning that Sion have been very tough to break down in their own backyard of late.

The hosts thus won four and drew one of the previous five Super League affairs at Stade de Tourbillon, conceding only one goal in the last four home outings along the way.

The streak involves the 1-1 draw to sovereign leaders and red-hot Zurich in late-January.

Since Lugano are the most defensive-minded team in the entire league this season, we would certainly not be surprised to witness a low-scoring scenario when the two outfits come across each other.

Lugano suffered a 0-2 home loss to Basel in a match which did not offer too many goal-scoring chances at all, at either end. They had won two in a row in the league beforehand and we can by no means regard them as underdogs here.

Considering Sion’s tremendous home form, we see the draw as the most likable of the three outcomes. You can back it at the 3.20 odds.