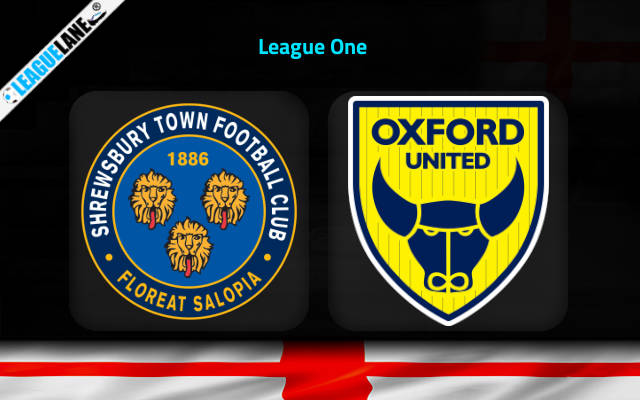 The Yellows have won seven of their last 11 league games, while they’ve scored at least three goals in over half of those fixtures. They are second in the zone for Play Offs and has won 4 of the last 5 matches. Shrewsbury are on an unbeaten run of 3 games recently while winning once, all maintaining a cleansheet. They are only 7 points from relegation safety and in need to climb up the table, they prepare this 38th Round of League One by inviting the Oxford squad to Greenhous Meadow this weekend.

The Yellows are at the 4th spot on the standing with 65 points from 37 games. They won 19 times in the league while drawing on 8 and losing on a 10 other occasions. They scored 71 goals in total which is the highest in the league while conceding a sum of 47 so far.

Oxford United go into this encounter after a 4-1 League One win against Burton Albion in their recent outing. In as many as 5 out of the previous 6 clashes featuring them, at least three goals have been struck.

On the other side, The Shrews reside at the 17th position on the table with 39 points. Of the 36 matches played, they won 9 games while drawing on a dozen and losing on 15 other occasions.

The hosts go into this match following on from a goal-less tie against Cambridge United last week. Their form hasn’t been good, as the team has won only 1 of their last 12 matches.

The visitors haven’t suffered any defeats in 9 of their 10 most recent meetings with Shrewsbury in league and are also on a fortunate streak of 4 wins against the hosts across all competitions. We therefore envisage a win for Oxford with also the poor home form Shrews considering into account.