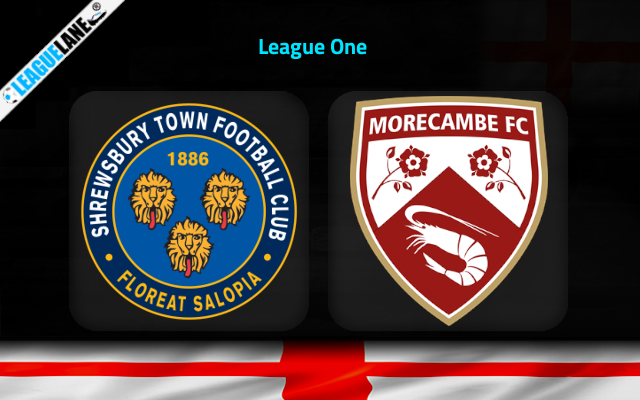 Shrewsbury are been inconsistent since the beginning of this season. Their fluctuating form is resulted in their positioning on the table. They sits 17th with a total of 39 points. They are 7 points clear from the danger zone. They have an average defensive and offensive lineup.

However, Shrewsbury have recorded a three-game unbeaten thread in the league of late. This includes a goalless draw against the toppers Rotherham. They will be hoping to extend their current unbeaten run.

Meanwhile, Morecambe remains inside the relegation spot as they failed to record a positive display since many league fixtures. They sits 21st on the table with a total of 32 points. They have an average attacking side while their defensive steel looks extremely weak.

Morecambe played a 1-1 draw against Bolton in their most recent league fixture away from home. With that draw, they are now winless for 9 straight league games. They will be having lowest of spirits following such a set of negative outcomes.

Despite of their overall inconsistent form, Shrewsbury possess a better run at home. They are unbeaten in 12 of the past 15 home affairs across all competitions.

On the other side, Morecambe are winless on road since their victory over Buxton in the FA Cup fixture on November 2021. They leaked two or more goals in 8 of the past 10 on road affairs in all competitions.

On top of that, Shrewsbury have a good head to head form against Morecambe at this venue. They have won 7 while losing two of their total 10 h2h meeting with Morecambe here.

Therefore, we back Shrewsbury to seal a win from this League One fixture against Morecambe on Tuesday at Greenhous Meadow.