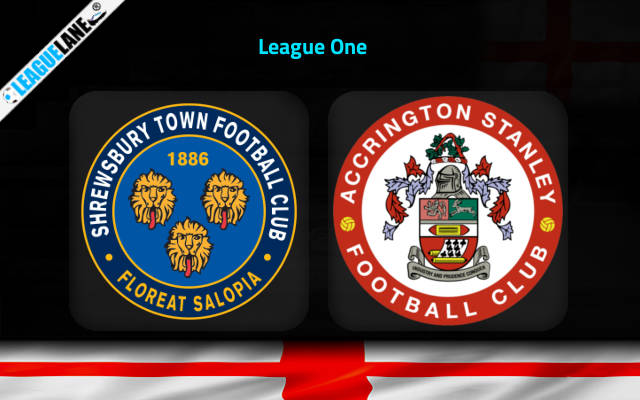 In game week 25 of League One matches, Shrewsbury Town faces Accrington Stanley for their next match on Wednesday at Shrewsbury.

Shrewsbury Town is in 18th position on the league table with 25 points from 23 matches. Their last match was against Fleetwood Town, which ended in a win for the team after they scored three goals against a goalless opposition. The match ended with 0-3 FT score.

Shrewsbury has 7 wins, 4 draws and 12 losses from their 23 matches in the league. The team broke their cold streak with their win against Cheltenham Town and are now on a 2-game win streak. The team has four wins in the last matches and has scored in eight of the matches as well.

Accrington Stanley is in the 10th position on the league table with 33 points from 23 matches. They played their last match against Rotherham United, in which Stanleys won after they scored the only goal in the match. The match ended with 1-0 FT score.

Stanleys have 10 wins, 3 draws and 10 losses so far in their league matches. The team is on a 2-game win streak at the moment and will look to continue in their form in the next match as well. The team has also scored in seven of their last ten matches.

The visitors have played 11 away matches in the tournament and have mixed results. The team has scored in six of their away matches but has only three wins. Their last away match was against Lincoln City, where Stanleys scored the only goal and won the match.

Both Shrewsbury and Accrington have performed well in their last two matches, earning wins. Both teams have a tendency to score goals and have scored well in the previous matches.

Shrewsbury has an advantage of playing in their home ground, which will be a great boost for the team. Both teams will look to earn the 3-points and gain an upper hand over the opposition.