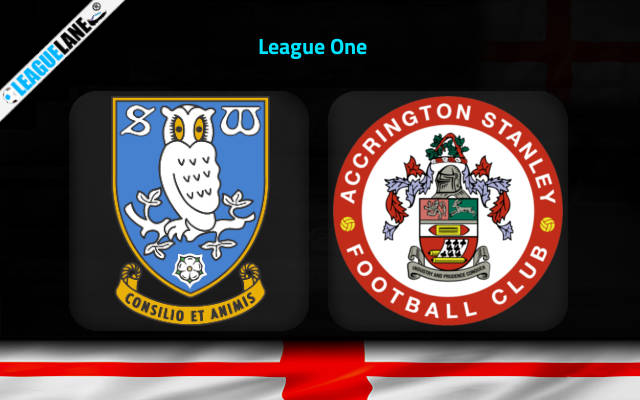 Postponed match in game week 23 of League One between Sheffield Wednesday and Accrington Stanley will take place on Tuesday at Sheffield.

Sheffield Wednesday played their last match against Lincoln City. Even though Sheffield scored a goal and levelled the scoreboard in the first half, they couldn’t maintain the draw for long. Lincoln scored two more goals and ended the match with 3-1 FT score.

Accrington Stanley played their last match against Portsmouth, in which Portsmouth scored four goals in the match while defending their post well, ending the match goalless for Accrington.

Sheffield has played well in their recent matches, earning over five wins in the last ten. Their performance has helped the team to move up the table and be placed 8th with 61 points from their matches. Their loss in the last match ended the team’s win streak and they will hope to make up for it with a win in this match.

Accrington Stanley’s recent matches have not produced the results the team had hoped for. From the last five matches, the team has won in two and lost in three. Their last four losses have ended goalless for the team as well. They stay 12th on the league table with 46 points from their matches.

Sheffield has the added advantage of playing in their home ground. The most recent matches have ended in wins for the team and they will hope to keep the streak going. Accrington has had a tough time in their away matches recently. They have lost continuously in their last five away matches.

Looking at the records, Sheffield Wednesday is most likely to win in the match than Accrington. Accrington has failed to score in three of their recent matches. So, Sheffield has the chance to win the match while keeping a clean sheet.