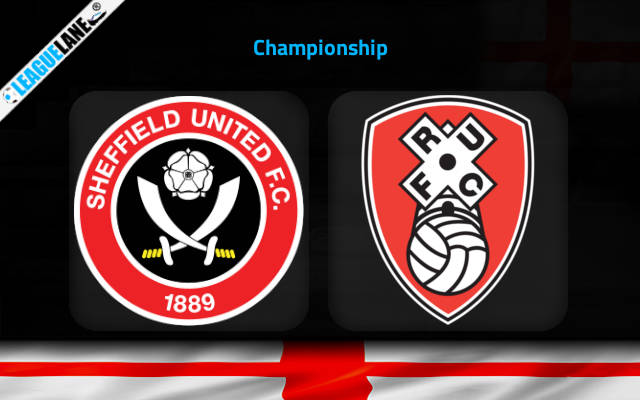 League leaders Sheffield United will look to maintain their winning momentum this Saturday as they play host to Rotherham. Both teams are separated by seven points in the league this season.

There is no doubt that the Blades are the best team in the EFL Championship this season. They defeated Hull City by 2-0 in their most recent league outing.

Two different players namely Oli McBurnie and Sander Berge entered their names on the scoresheet in that game. Moreover, the team managed by Paul Heckingbottom registered five shots on target as well.

It is worth noting that Sheffield’s defense have been breached only five times in the last eight games.

Rotherham are currently at the thirteenth position in the league. The Millers managed to draw against Watford in their most recent game.

It was Richard Wood who scored the opening goal with 120 seconds of the game. However, Vakoun Bayo scored the equalizer at the half-hour mark.

Moreover, Richard Wood has scored three goals in his last two appearances for the club.
Hence goals can be expected from the number 6 in this upcoming fixture.

Nevertheless, a win for Paul Heckingbottom‘s side will cement their place at the top of the league.

The Blades are having an excellent season this year. It needs to be noted that they played in the Premier League just over a year ago.

Going into this game, Paul Heckingbottom will try to keep the winning thread intact. Hence an attacking game plan can be expected from him.

It is interesting to note that both teams have only lost a single game this season. However, in terms of winning capability, it is Sheffield United who are the winners.

The most interesting fact is that Blades have scored the most number of goals this season.

Our prediction is that Sheffield United will win this match with BTTS – the odd for this tip will be at 2.10. This is considering the team’s excellent form in the EFL Championship.

The next tip for this game is that Over 2.5 goals will be scored – the odd for this tip will be at 1.90. Do also note that Oli McBurnie is on a two-game goal-scoring streak.