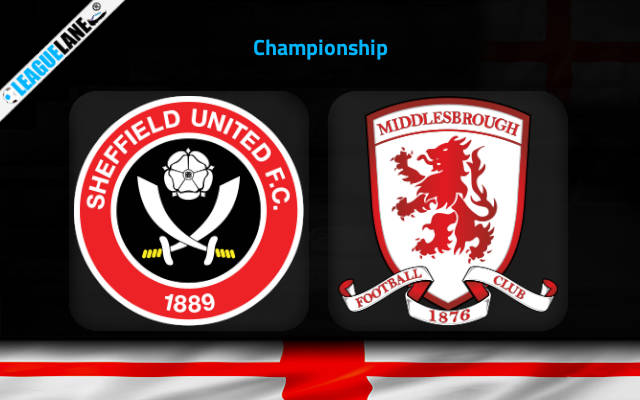 Sheffield United has enjoyed playing at home recently, with the side currently unbeaten in the last 7 home fixtures. They are only 1 point away from landing into the Play offs zone which came after their previous loss in the league. Middlesbrough won and lost twice from the last 5 fixtures and are just below the hosts on the table. This upcoming 26th Round of EFL Championship is scheduled at Bramall Lane where the Boro’s will be visiting this Tuesday.

The Blades are at the 7th spot on the standing with 53 points from 33 games. They won 15 times in the league while drawing on 8 and losing on 10 other occasions. They has kept 4 clean sheets in the last 5 games, conceding only once during this period.

The hosts had a 1-0 Championship loss in their previous game against Millwall. An interesting trait of more recent Sheffield United games is seeing a null in the scoreline. Just one of the last 5 games for them has ended with both teams scoring.

On the other side, The Boro’s reside at the 8th position on the table with 52 points. Of the 33 matches played, they won 15 games while drawing on 7 and losing on 1 other occasions. Their total goals to conceding ratio stands at 43:35 up to this point.

Middlesbrough head into the meeting following on from a 1-0 FA Cup win with the downing of Tottenham Hotspur in their previous match. But their previous league fixture ended up in a 2-3 loss against Barnsley. They have seen scored against on all of their past 5 league fixtures.

The visitors have not emerged victorious against Sheffield United in games played away from home for the previous 2 league matches.

We predict a narrow win for the hosts as they are currently unbeaten in the last 7 home fixtures. Also, the visitors lost the last 2 games played on road.