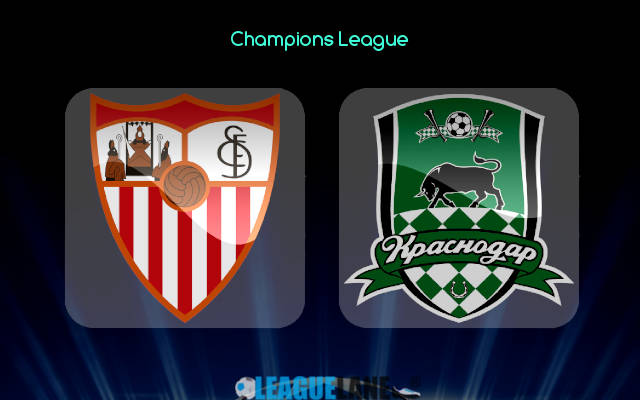 Situation in UEFA Champions League Group E could become much clearer after the third round where two main favorites Chelsea and Sevilla are playing against the underdogs Rennes and Krasnodar.

The Russian side is paying a visit to Andalusia on Wednesday night, hoping to stay in the top two race. They will need three or at least one point to make that happen.

Sevilla have been playing really poor in La Liga lately, being only two points above the relegation zone line. Krasnodar are doing bad on their domestic scene too, so someone’s poor series is about to end.

These two teams have met two times so far, in Europa League group stages 2018 to be precise.

Sevilla have won the home fixture 3-0 thanks to the goals of Ben Yedder and Banega, while losing in Russia 1-2 FT.

Krasnodar have awful stats when it comes to head to head encounters against Spanish teams, having lost seven out of ten matches, while winning only two. Their goal difference in those matches is 9-17.

As for Sevilla, they won seven out of 16 meetings against all Russian teams, scoring 26 and conceding 23 goals.

Sevilla’s fans have been quite optimistic after their squad returned from Camp Nou with one point won against Barcelona. However, the follow up matches turned out to be a true disaster. Team suffered three back to back losses to Granada, Eibar and Athletic Bilbao, slipping to 16th place on the table.

When it comes to UCL campaign, things are looking much more solid with four points from two games. Goalless draw against Chelsea at Stamford Bridge is considered as good, as well as 1-0 home win against Rennes. Luuk de Jong was the only goalscorer.

As we stated above Krasnodar are not in position to sit back and defend in Spain. They are in urgent need of points, so we are expecting a lot of action on both sides. Sevilla kept zero clean sheets in the last four La Liga outings, so BTTS at 2.05 seems like a good pick.