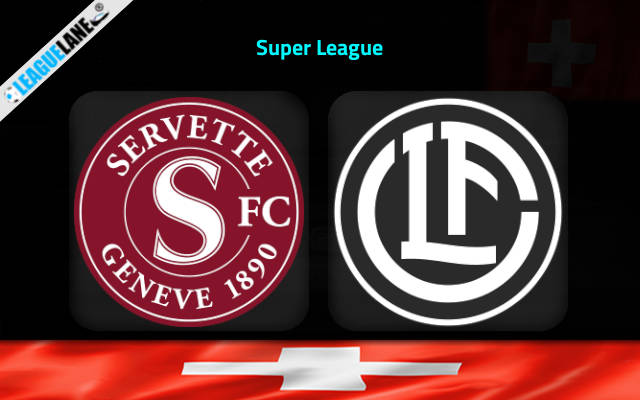 Lugano celebrated an important 3-1 victory over Young Boys on Saturday to get three points behind them in the battle for the third place of the Swiss Super League.

With three games to spare, Lugano have a shot at the top-three finish and a place in the UEFA Europa Conference League next season.

The team led by Mattia Croci-Troti have another route towards the same competition through Swiss Cup as they take on St. Gallen in the final on Sunday.

Croci-Troti’s troops have a nice opportunity to back up the weekend’s win over Young Boys on Wednesday night when they travel to Lancy to take on Servette at Stade de Geneve in Gameweek 34.

Servette have already secured another top-flight campaign a while ago and we can say they have been on the beach for quite some time now.

This is why Alain Geiger’s troops suffered four consecutive defeats in Super League. They have scored only a single goal in the process.

The latest loss was the most painful one as Servette conceded four unanswered goals on Sunday afternoon away at Luzern.

On another hand, it is worth noting that Lugano have shipped at least two goals in each of the previous three away outings in the league.

We believe the time has come for the low-scoring trend in this matchup to be terminated. Lugano need points more than their counterparts and they will come into this in higher spirits. However, we can definitely also see the hosts on target here knowing that Lugano shipped seven goals in the previous two away defeats at Lausanne Sport and St. Gallen.

The value is thus great with the Over 2.5 goals FT & Both Teams To Score pick at the 2.05 odds. The braver tipsters can also try with Lugano to win at the 3.40 odds.