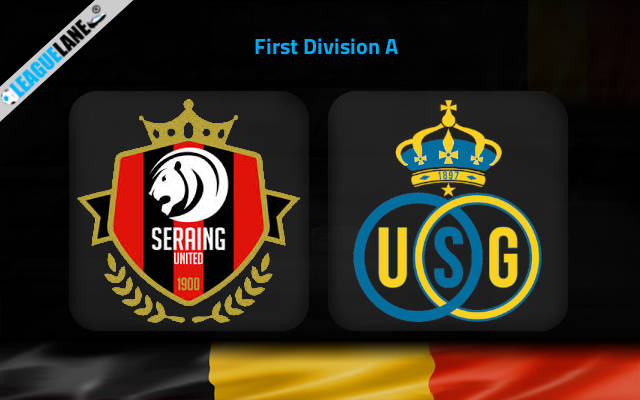 Royale Union SG is leading the Jupiler Pro League with 5 games unbeaten. Far down below are the Seraing lacking a hefty 28 points from the Union 60. The hosts are suffering the worst on the league with the last 5 league games ended up getting defeated. With a victory in mind, the guests are set to take on the crumbling hosts this weekend at the Stade du Pairay.

Royale Union SG is at top flight in the Jupiler Pro League at the 1st spot on the standing with 47 points. From the 21 games played, they won 15 times in the league while drawing only twice and losing on 4 other occasions. They have the best goals to conceding ratio on the league with 50:20.

After 4 straight league wins, Union 60 drew the previous game to Gent. They however opened this year marking a victory over Cercle Brugge by 4-1 on a Club friendly. Felice Mazzu’s men have managed to stick the ball in the net a total of 10 times in the last 6 matches involving Union Saint-Gilloise.

On the contrary, RFC Seraing is currently battling relegation and resides at the second last position on the table at 17th with 33 points. They won on 6 while drawing only once and losing the most at 14. They scored only 23 goals while conceding a sum 42 from the 21 games played so far.

The Red and Blacks have lost the last 6 games in a row. Their latest league defeat was against KV Mechelen by 0-2. They drew to Anderlecht for the Belgium Cup only to lose at the penalties closing 2021. They have failed to prevent opponents from scoring in 6 of their previous 6 matches, letting in 17 goals along the way.

We envisage a comfortable away win as the hosts have literally no chance in putting of the title contenders. A high scoring match is also up for cards as the home team is destroyed at the back.