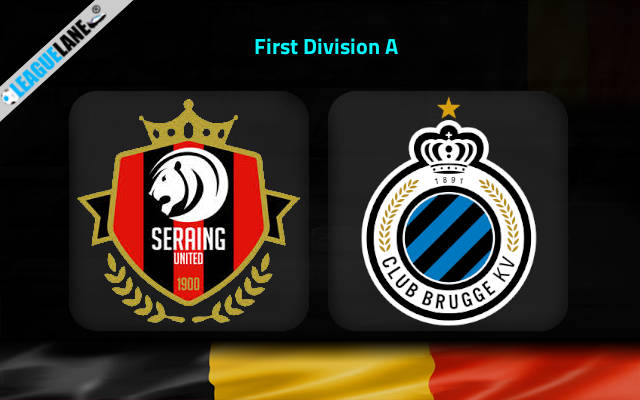 Club Brugge took advantage of Union Saint-Gilloise’s slip-up against AS Eupen to cut the gap behind the First Division A leaders to seven points after a demolishing 4-1 victory over third-placed Antwerp six days ago.

The match between Club Brugge and Antwerp should have been the derby of the Matchday between second and third-placed teams in the league standings, but Club Brugge killed the drama by putting four unanswered goals past their counterparts after conceding the opener.

It was the third consecutive league win for the reigning champions who look to have finally found their shooting boots.

The team led by Alfred Schreuder bagged seven goals in the last two wins over AS Eupen and Antwerp.

They will be highly motivated to continue this streak against out-of-form RFC Seraing who are still struggling to adjust to life in the elite class of Belgian football.

RFC Seraing are second from bottom at the moment, sitting seven points clear off the rock-bottomed Beerschot.

This position would take RFC Seraing to the relegation playoffs after the regular season. The safe zone is five points away for Jean Louis Garcia and his troops right now.

RFC Seraing lost 11 of the last 13 league games. They have failed to find the back of the net in any of the last five First Division A outings.

This match can only go in one way based on everything we have seen from these two outfits in the recent weeks. Club Brugge can’t afford a mistake while being in the pursuit for Union Saint-Gilloise at the top of the standings, especially not against the likes of RFC Seraing who have lost 11 of the last 13 First Division A matches.

We will back the visitors to have the lead at the half time and win the match at full time at the odds of 2.10, while you can also go with Club Brugge to win by at least two goals difference at the 2.15 odds.