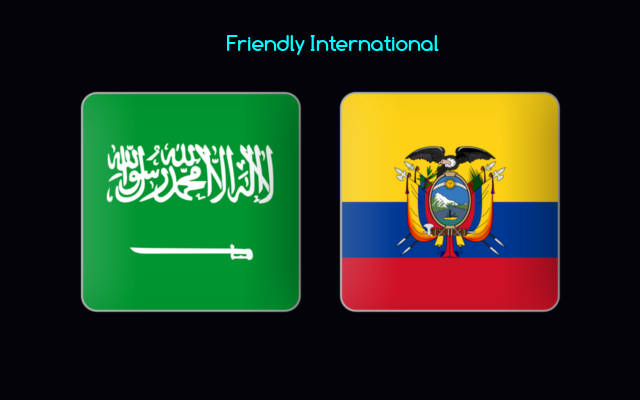 Both Saudi Arabia and Ecuador secured entry into the World Cup this December and with just two months remaining for the competition they will be eager to build some confidence and momentum.

After receiving a bye to the Second Round in the Asian World Cup Qualifiers, the Saudi Arabians won Group D, and that too while keeping a 100-percentage unbeaten record. In fact disregarding just two draws they had a 100-percentage winning record.

During this stretch they managed to find the back of the net an astonishing 22 times and all along they conceded just four goals. And at the end of the campaign, they had a lead of five points at the top of the table.

And as a reward for all of this hard work they managed to win a ticket to the World Cup.

Meanwhile the Conmebol region was much more competitive this time around and it was quite hard for them to secure a 4th place finish at the end of the campaign. But they did manage to do that and as a result they will take part in the upcoming quadrennial World Championships.

Going on they are also going through a good stretch of performances at the moment and are finding the back of the net in plenty. However, their counterparts for the day Saudi Arabia are kind of struggling to show consistency. Moreover, they are from the rather weak Asian federation as well.

Lightly expect a victory for Ecuador this Friday.

Saudi Arabia were winless in seven of their previous nine overall fixtures, and they went on two separate two-game losing streaks in the process.

On the other hand, Ecuador were unbeaten in 11 of their past 12 overall matches, and they went on a three-game winning streak in the process.

Considering the recent form of either team, and their respective federations, expect a win for Ecuador this weekend.

Tips for Saudi Arabia vs Ecuador