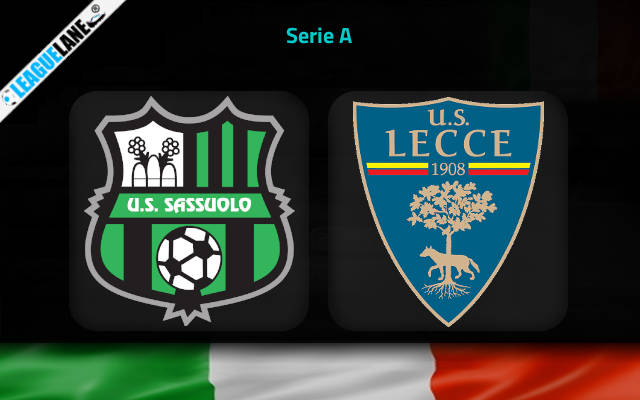 Sassuolo and Lecce suffered defeats to the likes of Juventus and Inter Milan on the opening day of the new Serie A season.

Both outfits will be hoping to have more luck on Saturday evening when they come across each other in Matchday No 2 at MAPEI Stadium – Citta del Tricolore.

It is worth mentioning that both Sassuolo and Lecce left great impressions in the first round despite their respective losses on the occasion.

I Neroverdi fired as many as 19 shots towards Juve’s goal in a 3-0 loss at Allianz Stadium, offering a very brave performance last Monday.

Lecce, on the other side, got super unlucky to concede a 95th-minute goal by Denzel Dumfries to eventually lose the clash against last season’s runners-up Inter Milan.

Lecce returned to the elite class of Italian football after winning Serie B last season. They are back after two years.

Head coach Marco Baroni has a lot of work to do on improving his team’s defensive performances. Lecce shipped three goals in a 2-3 defeat to lower-division Cittadella at the beginning of their Coppa Italia campaign two weeks ago.

The clash with attacking-minded Sassuolo will no doubts represent a huge test for the visitors in their maiden away game upon the top-flight promotion.

Sassuolo play attacking-minded football under Alessio Dionisi. We’ve seen at least three goals in all of the last four games they played, including the preseason exhibitions as well as the Coppa Italia tie against Modena (a 3-2 loss).

The Over 2.5 goals FT pick is well worth backing at the 1.66 odds, while you can also try with Sassuolo’s win by two or more goals difference at the sky-high 3.00 odds.