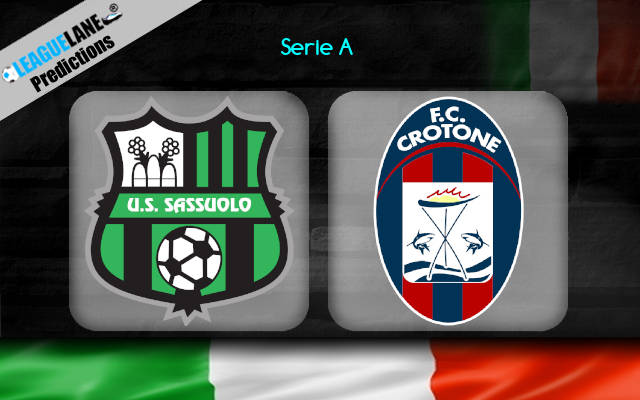 Crotone’s return to the Italian top flight has been everything but not glorious. They were easily defeated in both games played so far and conceded six goals.

Can situation get any better for them this Saturday in Reggio Emilia against Sassuolo?

Hosts have been on fire lately, presenting the same form and playstyle from previous season which made them super-entertaining to watch.

Greens and Blacks are marked as massive favorites for the win here at low 1.44 odds. We expected nothing less after watching them demolish Spezia 4-1 last weekend.

Interestingly, Crotone demolished Sassuolo the last time they met in 2018. It was a Serie A match played in Crotone and hosts have won it 4-1. Six out of the last seven head to head meetings between these teams were won by the hosts.

There were total 12 previous encounters so far – Sassuolo have won seven while losing only three. When it comes to goals, the total number is 30 which average exactly 2.50 per duel.

Five out of the last six meetings also ended with BTTS & Over 2.5 FT combo.

Sassuolo have ended the previous Serie A campaign in very high 8th place mainly thanks to very high stats in terms of efficiency.

Team from Reggio Emilia scored 69 goals in 38 games, which is quite impressive for this division. For example they scored more goals than AC Milan or Napoli!

Francesco Caputo was topping team’s charts with 21 goals. He scored one goal in the current season too, so he might be your choice in the goal scorers market.

As stated above, Sassuolo completely outplayed Spezia on the road 4-1, while the initial Serie A match against Cagliari at home ended without a winner 1-1. Their aggressive approach is surely going to work just fine against Crotone who have awful defense. Visitors lost to Genoa 1-4 and AC Milan 0-2.