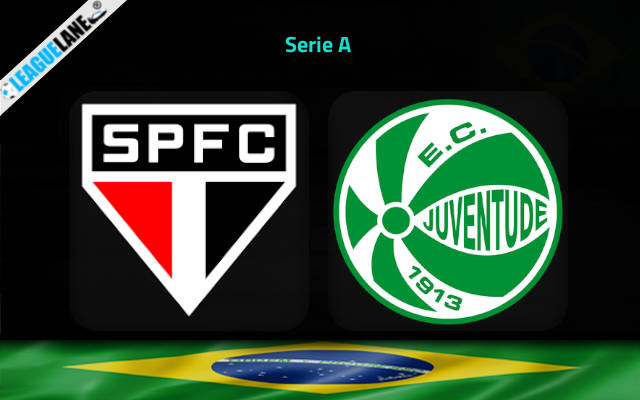 Both Sao Paulo and Juventude have improved their defensive displays of late. Knowing how important this clash is for both managers, we don’t expect either to take unnecessary risks here. The Under 2.5 goals FT is by far the best betting option for this tie.

There are two points separating Sao Paulo and Juventude in the bottom half of the Serie A standings going into the final two games of the season.

The visitors are in a somewhat tougher position, being just two points above the danger zone with the clash against fourth-placed Corinthians upcoming on the final day.

Both teams are currently inside the top-14 spots in the league, though, and should qualify for the group phase of the Copa Sudamericana next season.

However, with Cuiaba sitting lock on points with Juventude going into this tie, these continental competition spots are still up for grabs by all means.

Sao Paulo will rely heavily on their home form as the team lost only 3 of 18 home fixtures this season.

They suffered a tough 3-0 defeat at Gremio on Thursday evening but it will count for little when they return to Estadio de Morumbi.

The head coach Rogerio Ceni can generally be satisfied with the defensive performances his men have come up with of late. Sao Paulo kept three successive clean sheets before the mentioned defeat at Gremio.

Juventude, on the other side, won only 2 of 17 away fixtures this season. They did show a massive growth in form of late, winning four of the last six league outings, though.

Tips for Sao Paulo vs Juventude