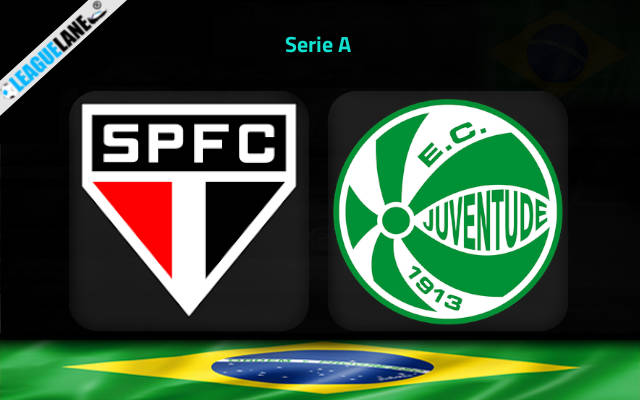 Matchday 14 of Brazil Serie A is set for this Sunday as the mid-side Sao Paulo host the relegation fighting Juventude where both these sides differ by 8 points. These two sides will be crossing swords at Estádio do Morumbi.

Sao Paulo is at the 10th spot on the standing with 18 points from 13 games. They won 4 times in the league while drew on 6 and lost on thrice other occasions. The hosts will be confident of scoring today and will look to keep up their record of scoring in every single home game this season.

The hosts will want to continue from where they left off last time out with a 1-0 Copa do Brasil win over Palmeiras. Fewer than 3 goals per match were scored during 5 of the past 6 fixtures where they have been involved. But they lost the last 2 league schedules in a row.

On the other hand, Juventude resides at the rock bottom closing the 20th position on the table with a mere10 points. Of the 13 matches played, they won only twice in the league while drew 4 times and have lost on 7 other occasions. Their total goals to conceding ratio stands at 12:24which is the worst in Serie A, showcasing their dreadful lineup.

After being defeated in their last game at the hands of Atletico GO by 1-3 in Serie A action, Juventude will be hoping that they can get a better result in this one. They now come into this on the back of 4 successive defeats and sit firmly at the bottom of the table.

Sao Paulo remain undefeated to Juventude in their last 5 h2h meet-ups. They had no trouble finding the back of the net recently and has scored in the last 6 home games.

Meanwhile, Juventude are without a win away from home in their last 3 league matches. They even lost their last 2 away league fixtures conceding 5 goals in total.

Knowing that, we expect the hosts to seal a win against this Sunday.