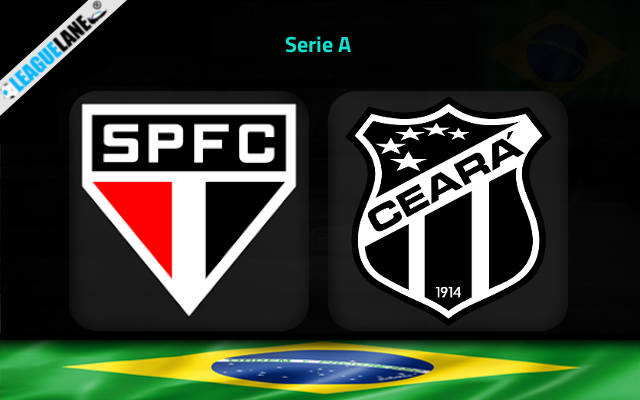 In the last 10 encounters between these two sides in all competitions:

The hosts currently sit in 14th position in the league table with 29 points on board after 24 league games as they have drawn four times and won once in their last 5 league games.

Sao Paulo come into this fixture on the back of a 1-1 draw against Santos at home in a game which saw Jonathan Calleri score a 35th minute penalty.

On the other side of the field, the visitors, Ceara currently sit in 13th position in the league table with 29 points on board after 23 league games as they have lost twice, drawn twice and won once in their last 5 league games.

Ceara come into this fixture on the back of a 3-1 loss away from home to Atletico Mineiro in a game which saw Gabriel Lacerda score a consolation goal.

Taking the above into consideration, we back the odds at 1.83 for the hosts, Sao Paulo to win as they will be desperate to win on home soil. They will also take confidence on the fact that they are playing at home which will play to their advantage. Hence, we should see the hosts win this fixture.

Hence, we see that in this game, there will be goals under 2.5.

Tips for Sao Paulo vs Ceara