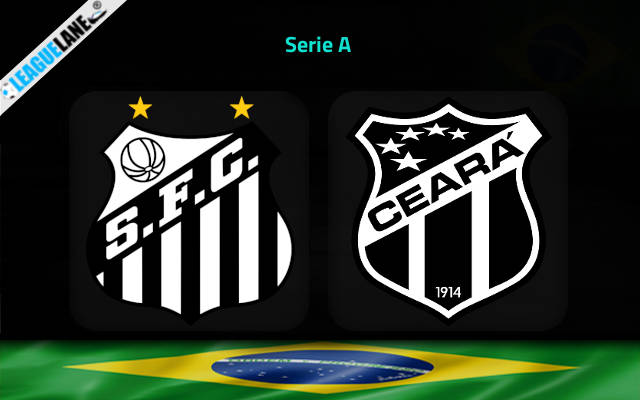 Santos has played moderately well in their matches from the start of the season. From the six matches played, the team has got three wins, two losses and one draw. Their current form has placed the team fifth on the league table with ten points from their matches. In the matches they have won, the team has scored over 1.5 goals.

Santos played their last match against Goias, in which Goias scored the only goal in the match, leaving Santos goalless. The match ended with 1-0 FT score.

Ceara has had a rocky start to their season. From the matches they have played so far, the team has secured win only in one of the matches. At the moment, the team is winless in the last four matches as well. Their poor performance has placed the team third from the bottom of the table with only four points from their matches.

Ceara played their last match against Flamengo. Both teams scored two goals each, ending the match in a draw with 2-2 FT score.

Ceara will have a tough time when they play against Santos in the upcoming match. Santos has won in three of the last six matches, while Ceara is winless in the last four matches. The visitors had a loss streak which lasted for three matches, in which the team had failed to score over 1.5 goals.

Santos’ home matches have brought in some good results for the team. They have won consecutively in the three home matches this season and will hope to continue with their streak in the upcoming matches. They have also scored over 1.5 goals in the matches. Ceara has played only two road trips so far into the season. The first match ended in a win for the team while the second ended in a loss.