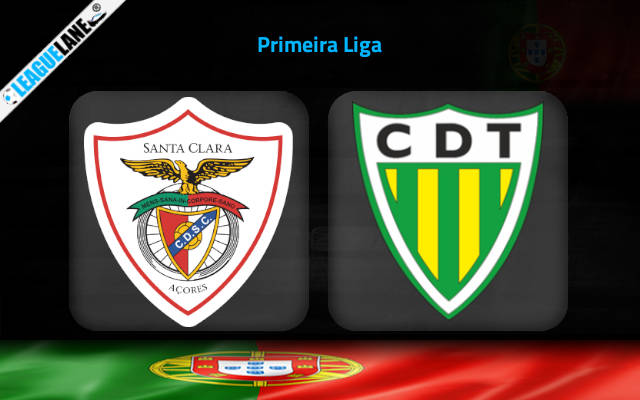 In game week 22 of Primeira Liga, Santa Clara faces Tondela for their next match on Sunday at Ponta Delgada.

Tondela and Santa Clara are in the 13th and 14th position respectively with 16 points from 17 matches.

After the match against Sporting Lisbon, Santa Clara has bagged yet another win. A 78’-minute goal by Ricardinho helped the team to take the lead at the final moments and win the match. The match ended with 3-2 FT score. The team had started off the season with multiple draws and losses and occasional wins. However, they have improved their play in the last five matches. They have won three games in the last five matches and have scored in those five matches as well.

The in-form team now has a win-streak of three games going on. They have played nine matches in their home ground in which they have scored in six matches and have won four matches.

Tondela played their last match against Rio Ave. The match continued in to the extra time because both teams didn’t score any goal till the end of 90’-minute. However, Tondela scored in the 96’-minute, securing them a win from the match.

Tondela has only drawn a single match in Primeira Liga this season. They have failed to score in most of their match and have only five wins from the matches. Their away matches have not produced the results they wished to see. They have played 8 away matches and have only one win to show in these. The team has not won in their last four matches as well.

Both teams have the same points in the league table and a win in the next match will help the winning team to have an advantage over their opposition. Santa Clara has played well in their recent matches and has scored in most of their matches while Tondela has not. Santa Clara also has the advantage of playing in their home ground.

I believe Santa Clara has more chance to win in the match than Tondela. They are on win streak in their home ground and will look to keep this streak going. The match is most likely to with under 2.5 goals as well.