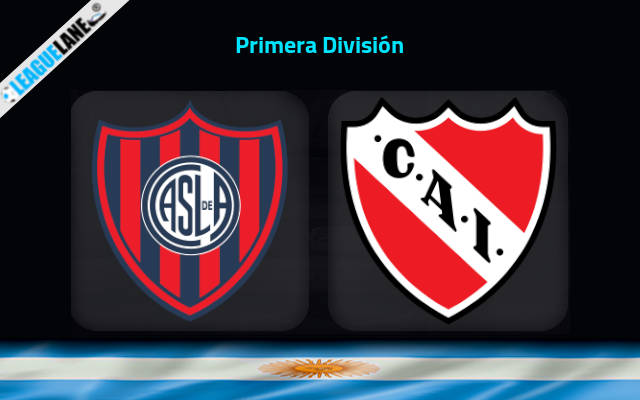 Round 1 of Liga Profesional is set to kick-start this Saturday as San Lorenzo play host to Independiente at Estadio Pedro Bidegain.

San Lorenzo will play in this match after a 1-1 Copa de la Liga Profesional draw against Racing Club. They are leading the group with 30 points and has never lost a game so far in this cup competition. Of the 14 matches played, they won on 8 while having drawn 6 and are aiming for the Play Offs.

The hosts finished their last season finishing at the 21st spot gaining 27 points. From those 25 matches, they won only 7 games while having lost on 12 other occasions. Their recent form is better compared to their prior season and have been on a persistent run of goal-scoring form, finding the back of the net in each of their last 6 matches.

On the other side, Independiente failed to make it to the Play Offs of Copa Sudamericana after coming second to Ceara in Group G with just 6 points in deficit. Coming to their Copa de la Liga Profesional performance, they were awful, winning only 3 times of their 14 matches played.

After being beaten in their last game against Ceara in Copa Sudamericana competition, Independiente will be hoping to turn things around here. The trend of at least one team drawing a blank in games featuring them has become evident in recent matches. Checking on their last 6 outings reveals that this has occurred 6 times.

San Lorenzo are without a home win since their last 8 home fixtures. They lost half of those games and they are more of an away team gaining results more often on road rather than at home.

Meanwhile, Independiente have mixed results on-road. They win and lose away games in an uneven manner but they have won twice of their last 2 away fixtures.

We feel that an away win or draw seems to be a sensible option as both sides have also seen drawing their previous h2hs.