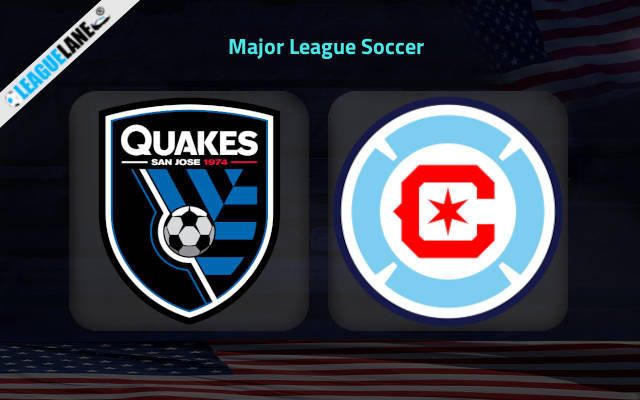 Matchday 18 of Major League Soccer is being scheduled as San Jose Earthquakes play host to Chicago Fire where both these sides reside at the bottom. These two sides will be seen battling it out at PayPal Park, this Monday.

Chicago Fire is at the 13th spot on Eastern Conference with 17 points from 17 games. They won 4 times in the league while having drawn 5 and got defeated on 8 other occasions. Lying second from the bottom, they have achieved just 3 wins in their 26 most recent away games in Major League Soccer.

The visitors go into this game following a 1-0 MLS win against Philadelphia Union in their previous match. Looking at their form, Chicago Fire have been losing at HT/FT in their last 3 away Major League Soccer games in a row.

On the other hand, San Jose Earthquakes resides at the rock-bottom of Eastern Conference with just 15 points. Of the 16 matches played, they won only 3 times in the league while having drawn on 6 and lost on 7 other occasions. They will need to improve their attack if they’re to get anything out of this upcoming game.

San Jose Earthquakes will be looking to improve on their last outing here after the 2-0 MLS defeat in their last game at the hands of Real Salt Lake. They have failed to prevent opponents from scoring in 5 of their previous 6 games, shipping 10 goals during that time.

A period of 7 straight home games without a defeat marks the MLS campaign of San Jose Earthquakes. They have even scored at least one goal in each of their last 14 home league games.

Meanwhile, Chicago Fire has achieved just 3 wins in their 26 most recent away games in the league. They even lost the last 2 h2h matches in a row over this rival.

Since the hosts have lost only one home game this season, we feel that a win for San Jose Earthquakes is up for cards this Monday.