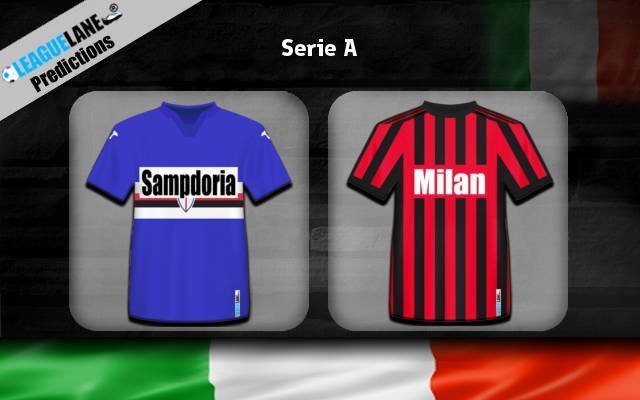 Milan have gone into Derby della Madonnina in a much better shape and on the back of a ten-game unbeaten streak but still failed to snatch a positive result, seeing a 2-3 loss to Inter and now travelling for their Matchday 29 clash at Sampdoria in need of a pick-me-up.

Rossoneri have been rock-solid and we feel Gennaro Gattuso should have no troubles lifting their spirits with great mentality at this point, though.

Sampdoria will have high hopes they can capitalize on the visitors’ troubles and now come on a high after outclassing Sassuolo 3-5 in an eight-goal thriller, as Defrel, Quagliarella, Linetty, Praet, and Gabbiadini all found the net to connect their third win in four outings.

They’ve struggled for consistency at home ground and this will be more worrying after seeing Milan snatch a Coppa Italia win here in January, as Marco Giampaolo still has to prove his men have put goalscoring inconsistency behind them led by veteran Quagliarella – with 21 goals to his name so far.

Milan made it past the rivals in Coppa Italia with extra-time goals from Patrick Cutrone in January.

Rossoneri have thus connected their third win in a row in head-to-head clashes.

Blucerchiati have seen seven losses in the last nine head-to-head occasions too, which feels a lot more worrying.

We will now stick our necks out for AC Milan to build on such records against Sampdoria with another upset at Stadio Comunale Luigi Ferraris, as we go for an Away win at 2.35. We’ve seen them rock-solid in Serie A and we hope they’ll bounce back quickly after a thriller loss in the city derby ahead of the International break.

Rossoneri have been picking it up in the final third and now regularly score numbers of goals, led by Piatek in the final third. With that in mind, we now hope for another exciting contest after getting used to it from both sides, as we go for Over 2.5 goals FT at 2.00. We’ve seen both sides enjoy such clashes lately and this looks like a solid approach as well.