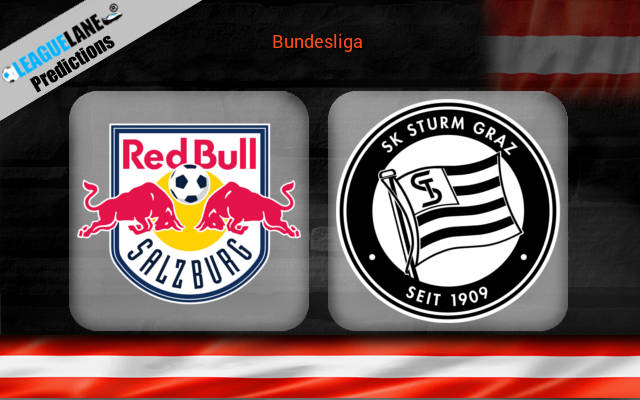 RB Salzburg are leading the Championship group with an impressive 6-game unbeaten run in the league. They even reached the Round of 16 of Champions League and has lost only once in the league.

Sturm Graz is below them with momentum going on as they are undefeated in the last 7 games played in the league.

Both teams are currently in the zone for UCL promotion and they cross swords this Sunday at Red Bull Arena where the Blackies will be arriving for the 23rd round of Bundesliga.

The Red Bulls are at top flight in Bundesliga with 27 points from 22 games. They won 17 times in the league while drawing on 4 and losing only once. They have scored 50 goals in total while conceding a sum of only 13 which shows how profound their defense and offense lineups are.

Salzburg was recently battered in the UCL by Bayern Munich suffering a 1-7 defeat. They however won their previous league fixture against Altach by 4-0. In their prior 6 fixtures, Matthias Jaissle’s squad have seen rewards for their attempts on goal a total of 10 times giving them an average number of goals per match equal to 1.67.

On the contrary, the visitors resides just below them at the 2nd position on the table with only 18 points. Of the 22 matches played, they won on 10 games while drawing on 7 and losing on 5 other occasions.

In their preceding fixture, Sturm Graz drew 2-2 in the Bundesliga match with SV Ried. The back of the net has been hit 20 times in the previous 6 games in which the visitors have been involved, yielding an average of 3.33 goals each clash. Opposition teams have taken 7 of those goals.

We feel that a home win is likely to occur as the hosts has never lost at home winning 90% of the games played at Red Bull Arena this season. Also while considering the past h2h dominance, a win for Salzburg remain intact.