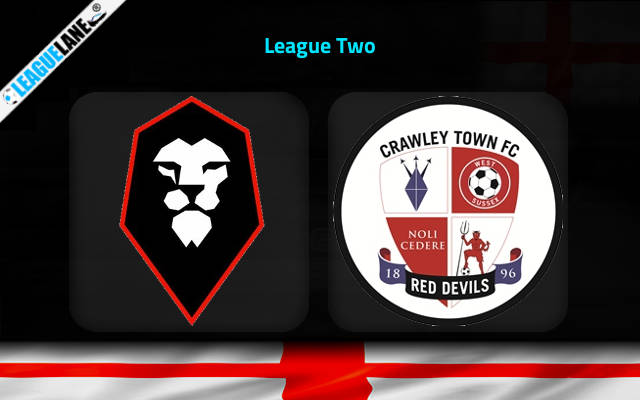 Salford has played well in their recent matches. Since the beginning of December, the team has not lost a match in League Two. The team has also scored in seven of their last ten matches. The team now stands 11th on the league table with 56 points from their matches so far.

Salford played their last match against Walsall. Even though Walsall had scored the first goal of the match, Salford scored two goals in the match, securing the team the win in the match with 2-1 FT score.

Crawley Town has got mixed results from their matches this season. From the last ten matches, the team has won in four, drawn in two and lost in four. The team is now placed 12th on the league table with 51 points to their name.

Crawley Town played their last match against Rochdale, in which Crawley Town scored the only goal of the match and defended their post well from the opposition. The match ended with 1-0 FT score.

Salford has improved their form and has achieved a nine-game unbeaten streak in their matches. The team has also won consecutively in their last two matches. Crawley has achieved two wins straight in after they ended their five-game winless streak. Both teams have played well in their recent matches. So, the match will be a tight one.

Salford City has the advantage of playing in their home ground, where they have lost in only a few of their matches this season. They are also unbeaten in their last four home matches. Salford’s away matches have produced mixed results. However, their last two matches have ended in loss for the team.