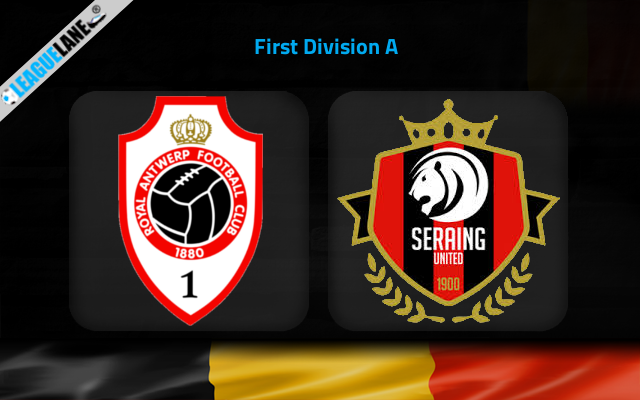 Royal Antwerp will play host to Seraing in a Jupiler League fixture at Bosuilstadion on Friday.

Seraing has been one of the worst and they were lucky not to have gotten relegated at the end of the previous season.

They had finished 17th in a table of 18 and played a set of relegation fixtures which helped them to regain the topflight position. Seraing were able to deliver just 8 wins that season and all along they had let in goals in huge numbers.

They have continued this dismal form even into this new campaign and are still struggling with their defense. The team lost 6 of their 8 league fixtures played so far in this campaign.

Meanwhile, Royal Antwerp had an impressive form throughout the previous season. It seems that they have carried over the momentum. They will be determined to deliver their absolute best in order to extend their current winning streak.

Antwerp will have the highest of spirits when entering a home fixture as they already own a streak of five winning games in the new season.

The consecutive 8-game win helped them to climb to the sky-high top position in the league standings.

Bommel can be thrilled with his team’s offensive line consisting of Vincent and Michael, who have scored a total of 5 and 4 goals respectively so far in this campaign.

We can see the value of backing Royal Antwerp to win & Over 2.5 goals at the 1.83 odds, while you can also go with Vincent to score anytime at the 1.72 odds following his current streak of 4 goal-scoring games.